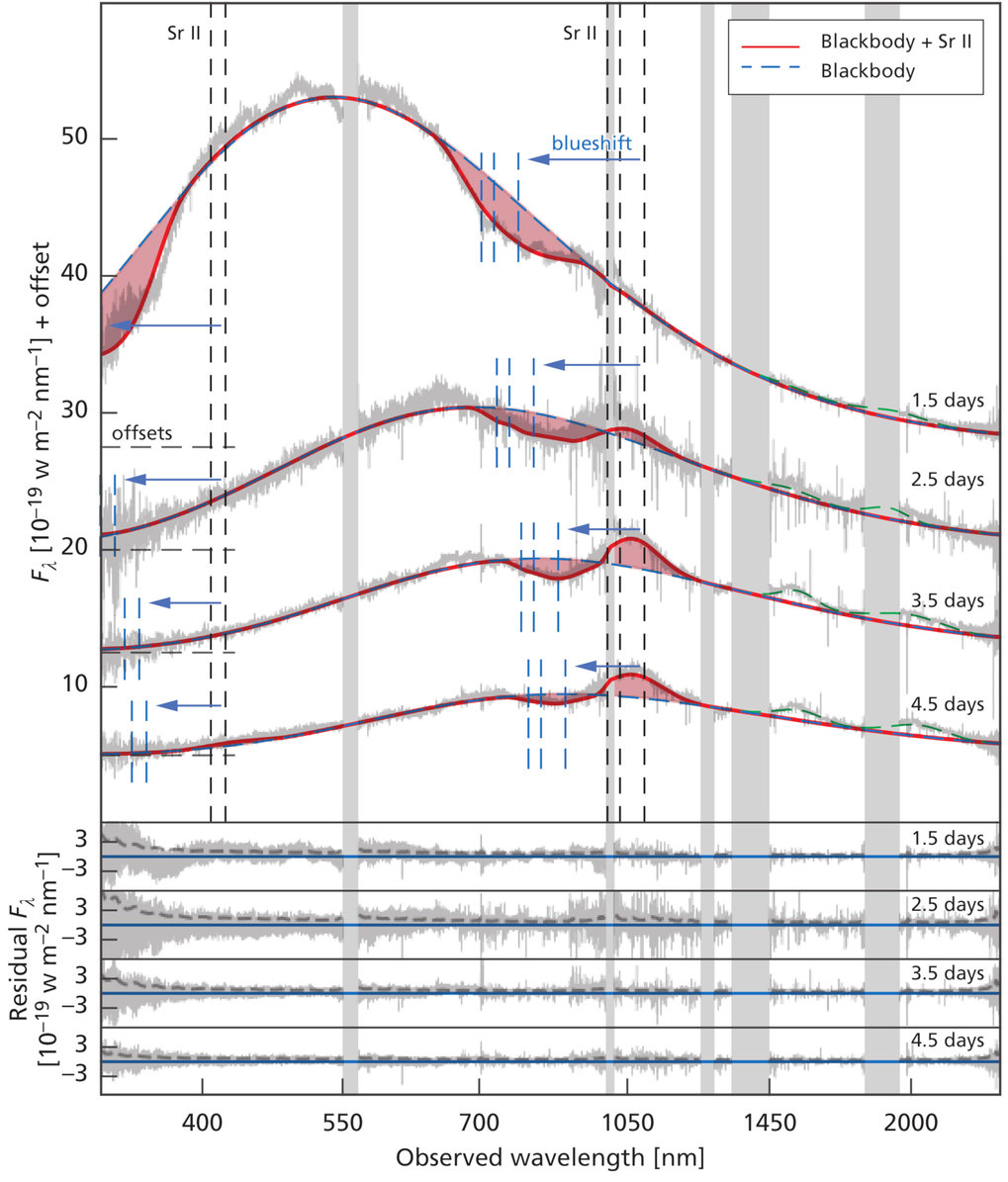 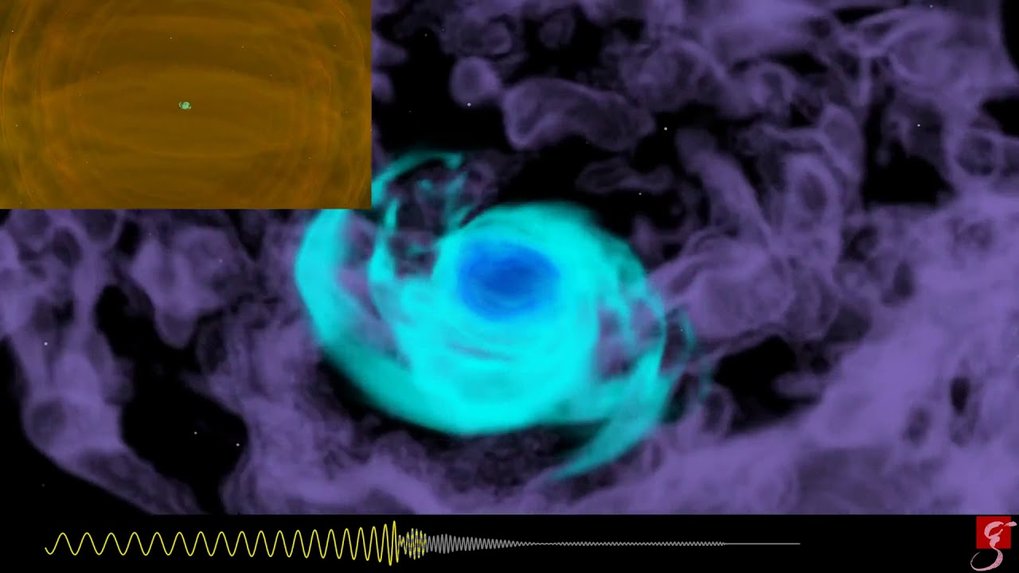 This numerical relativity simulation shows the merger of two neutron stars caused by the gravitational signal GW170817 depicted at the bottom edge of the image.

The Alchemy of Merging Neutron Stars

For the first time, astronomers have identified a chemical element that was freshly formed by the merging of two neutron stars. The underlying mechanism, called the r-process – also known as rapid neutron capture – is considered to be the origin of large quantities of elements heavier than iron. This discovery sheds new light on the mystery of the environments in which this r-process takes place. With important contributions from the Max Planck Institute for Astronomy (MPIA) in Heidelberg, Germany, astronomers have now unequivocally demonstrated that the fusion of two neutron stars creates the conditions for this process and acts as a reactor in which new elements are bred. 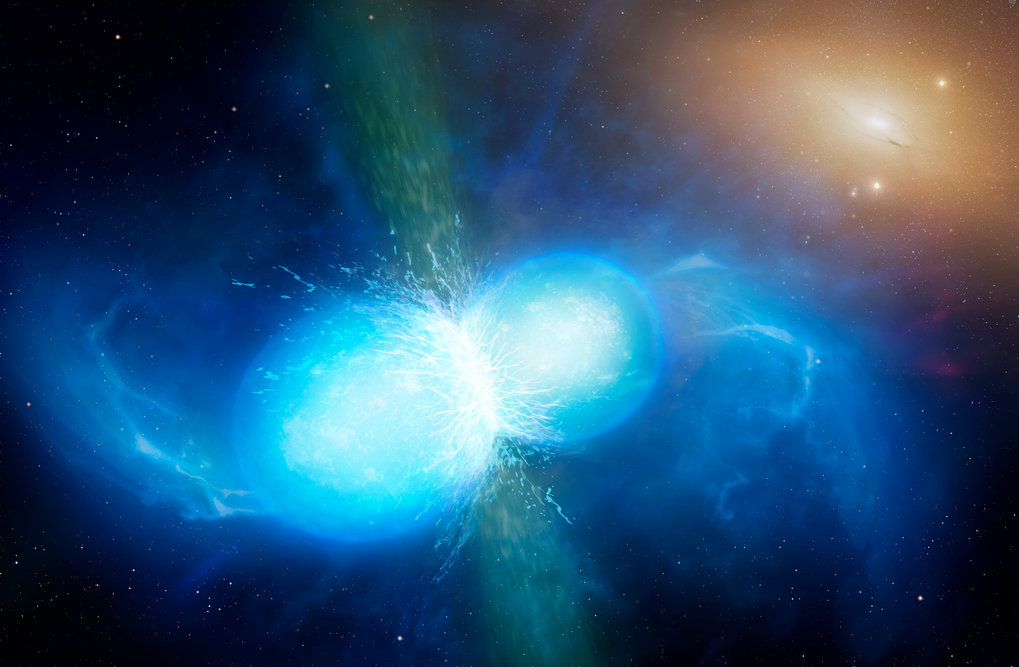 The origin of heavy elements such as gold, lead and uranium has not yet been fully clarified. The lightest elements – hydrogen and helium – were already formed in significant quantities with the Big Bang. Nuclear fusion in the cores of stars is also a well-established source of atoms in the mass range from helium to iron.

For the production of heavier atoms, scientists suspect a process that attaches free neutrons to already existing building blocks. The fast variant of this mechanism is the so-called r-process (r stands for rapid) or fast neutron capture. At present, research is being carried out to determine which objects might be sites where this reaction takes place. Possible candidates so far are a rare type of supernova explosions and the merging of dense stellar remnants like binary neutron stars [1].

Large amounts of strontium form within less than a second

An international group of astronomers with substantial participation of Camilla Juul Hansen from the Max Planck Institute for Astronomy (MPIA) in Heidelberg has now discovered the signature of the element strontium, which was formed by the r-process during an explosive fusion of two neutron stars. With on average 88 nucleons, of which 38 are protons, it is heavier than iron. 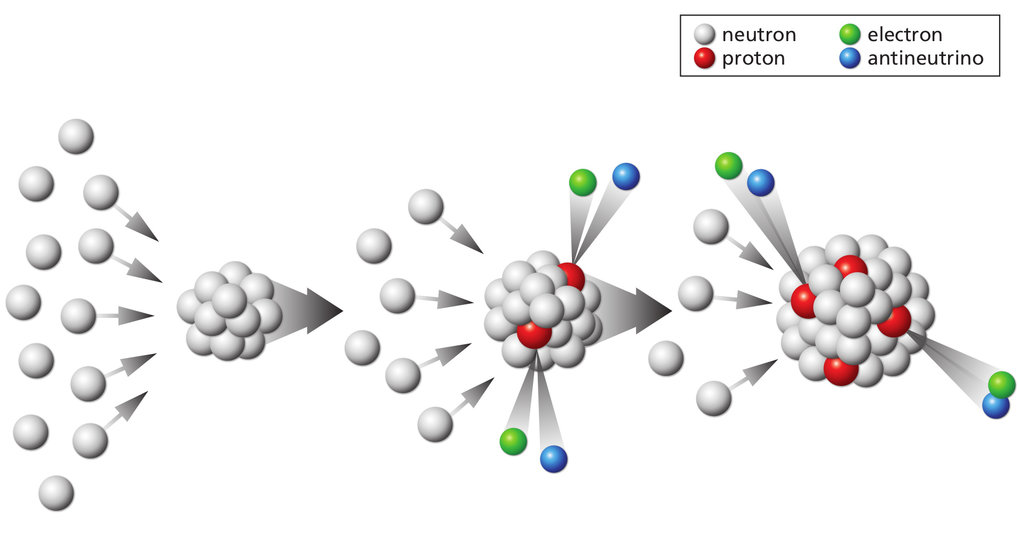 The explosive merger produced a raging expansion shell moving with 20% to 30% of the speed of light. It consists of newly formed matter, of which strontium alone amounts to about five Earth masses (1 Earth mass = 6·1024 kg). Thus, for the first time, the researchers provide clear evidence that such a collision provides the conditions for the r-process in which heavy elements form. Besides, this is the first empirical confirmation that neutron stars consist of neutrons.

The r-process is truly rapid. Per second, more than 10²² neutrons flow through an area of one square centimetre. The beta decay transforms some of the accumulated neutrons into protons, emitting one electron and one antineutrino each. The special aspect about this mechanism is that the neutrons combine to form large compounds faster than the newly formed conglomerates break up again. In this way, even heavy elements can grow from individual neutrons within less than a second.

Using the Very Large Telescope (VLT) of the European Southern Observatory (ESO), scientists obtained spectra following the spectacular discovery of the gravitational wave signal GW170817 in August 2017. In addition to a gamma-ray burst, the kilonova AT2017gfo, an afterglow in visible light due to radioactive processes, which faded within a few days after an initial sharp increase in brightness, occurred at the same location. The first analysis of the spectra in 2017 by another group of researchers did not yield a clear result about the composition of the reaction products. 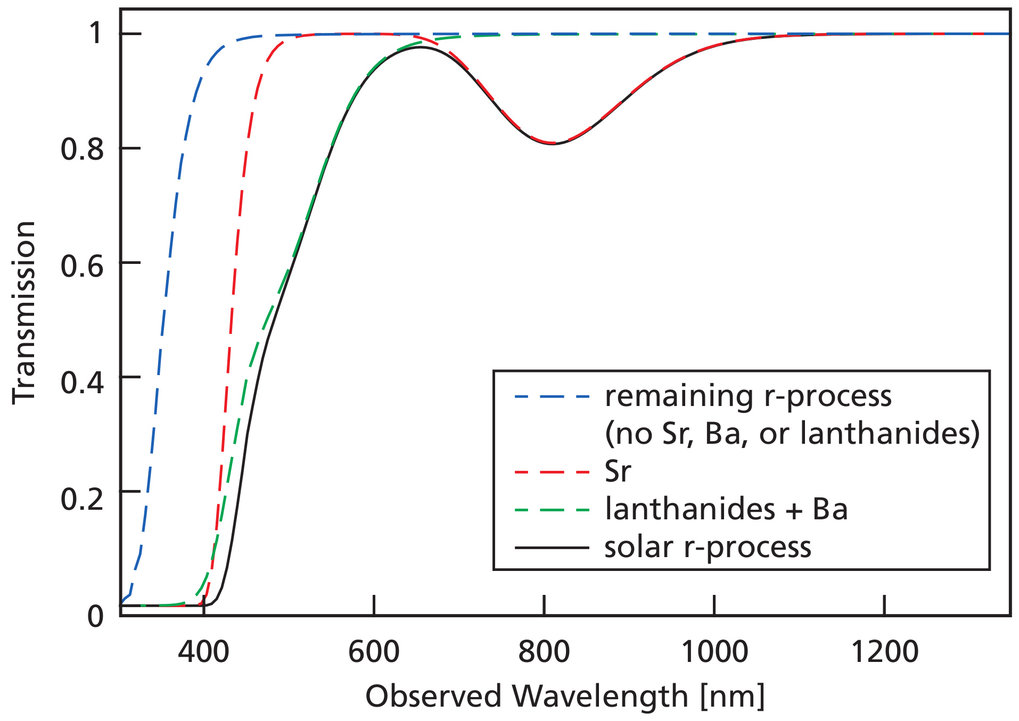 Dr. Hansen and her colleagues based their re-evaluation on creating synthetic spectra and modelling the observed spectra, which were recorded over four days at intervals of one day each. The spectra indicate an object with an initial temperature of about 3700 K (approx. 3400 °C), which faded and cooled in the following days. The brightness deficits at wavelengths of 350 and 850 nm are conspicuous. These are like fingerprints of the element that absorbs light at these parts of the spectrum.

Taking into account the blue shift of these absorption lines caused by the Doppler effect the expansion following the merger event produces, the research group calculated spectra of a large number of atoms [2] using three increasingly complex methods. Since these methods all yielded consistent results, the final conclusion is robust. It turned out that only strontium generated by the r-process is able to explain the positions and strength of the absorption features in the spectra.

Progress in the understanding of the nucleosynthesis of heavy elements

“The results of this work are an important step in deciphering the nucleosynthesis of heavy elements and their cosmic sources,” Hansen concludes. “This was only possible by combining the new discipline of gravitational wave astronomy with precise spectroscopy of electromagnetic radiation. These new methods give hope for further ground-breaking insights into the nature of the r-process.”

[1] Neutron stars are extremely dense stellar remnants of massive stars after they explode in a supernova at the end of their lives. Neutron stars may possess masses between 1.4 and a theoretical maximum of 3.2 solar masses (1 solar mass = 2·1030 kg). They typically have diameters around 10 km.

The spectra were recorded with the spectrograph X-shooter at the Very Large Telescope of the European Southern Observatory (ESO) during the observation program 099.D-0382 and published for the first time by Pian et al. (2017, Nature, 551, 67). The current results were obtained in cooperation with Darach Watson and Jonatan Selsing (University of Copenhagen, Cosmic Dawn Center, Denmark) and collaborators of the University of Copenhagen, the Cosmic Dawn Center, Denmark, the Center for Astronomy of the University of Heidelberg, the Heidelberg Institute for Theoretical Studies, the TU Darmstadt, the GSI Helmholtzzentrum für Schwerionenforschung, Darmstadt, the Max Planck Institute for Astrophysics, Garching, as well as other scientific institutes in Denmark, Italy, Iceland, the USA and Great Britain.