Most of the initial gas mass in our Galaxy has been converted into stars. While massive stars and their final stages dominate the energy input into the interstellar medium, low-mass and solar-type constitute most of the total mass in our galaxy. It is generally accepted that stars form by gravitational collapse of dusty molecular cloud cores. 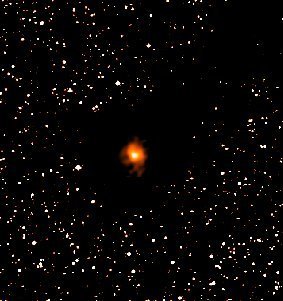 Different internal processes can stabilize a gravitationally bound cloud core, but it may eventually collapse under its own gravity and form one or more protostars at its center. In their initial phases they are so deeply embedded in their parental cloud core that they are invisible at optical and near-infrared wavelengths.

Due to the large angular momentum of the cloud a circumstellar disk forms soon around the protostellar core. These disks are believed to be responsible for jets and other bipolar outflow phenomena associated with young stars. These outflows are probably magnetically driven and regarded as one of the mechanisms to transport away angular Momentum. Without this efficient transport of angular momentum a star would not be able to grow in mass.

However, it is not well-understood how the particular outcome of a star formation event depends on the initial conditions in the cloud core, i.e., how the initial mass function and the fraction of binary and multiple stellar systems are linked to the conditions of the interstellar medium and how in detail a molecular cloud core gets rid of its enormous excess of angular momentum (a factor of 100.000 compared to a T Tauri star).

In contrast to high-mass stars, which evolve much faster, solar-type and low-mass stars are generally believed to emerge from their birth 'cocoons' before they are fully evolved (i.e., main-sequence stars) and can be observed as optically visible T Tauri stars.