Welcome to the Theory Group of the Planet and Star Formation Department!

To date, Earth is the only place we know to harbour life in the universe. But continuously we detect new worlds - planets orbiting other stars than the sun.

These are the questions we try to answer in our group in a quantifiable way. We do this by putting our planet formation models to the test against observations of disks around young stars and the diverse population of detected exoplanets. We also make use of the record of planet formation in our own planetary system, from planets and moons down to comets, asteroids, and Kuiper Belt objects.

Our working tools are pencil and paper as much as some of the fastest and largest supercomputers on this planet. On these systems we apply a range of two and three dimensional Magneto-Radiation Hydrodynamical models with selfgravity and N-body treatment of embedded objects to study star and planet formation in the greatest detail possible. Results are incorporated in "Planet Prediction" models that can produce and explain the diversity of exoplanets in the universe. 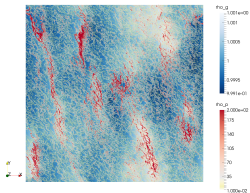 Streaming instabilities are a result of sufficient dust densities and large relative flow velocities between dust and gas. This instability itself produces the turbulence that makes it possible to clump dust sufficiently together in order to become self-gravitating and thus overcome the meter-barrier in planet formation. This mechanism is thus of significant interest for the scientific community. [more] 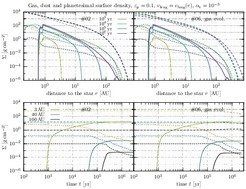 Over a period of 6 years, DFG is funding research projects within its SPP framework (DFG-Schwerpunktprogramm) "Building a Habitable Earth". The SPP will contribute to the still open question how Earth became the only known habitable planet. [more] 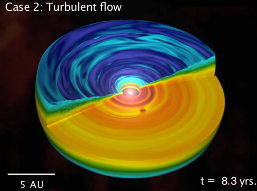 Hydrodynamic instabilities may lead to vortex formation and thus initiate dust concentration in the inner Protoplanetary disk (<100Au) or lead to direct gravitational collapse and giant planet collapse in the outer disk.
We investigate various scenarios for the stability and involved timescales of those features in shearing boxes, global 2D and 3D simulations. [more] 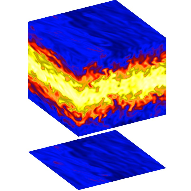 The amplification or dampening of hydrodynamically instable features may be modified by the presence of dust. Also the dynamics of dust will surely follow pressure maxima in a protoplanetary disc.
Therefore there is ample potential for complex interactions between the gas and dust material which we aim to study. [more]

A sufficiently massive planet will induce spiral arms, gap formation, migration and accretion shocks in his surrounding disk. We attempt to understand how all those processes backreact onto planetary formation and disk evolution. [more] 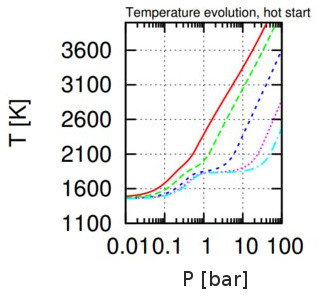 Planets and their evolution

In order to link planetary population synthesis modells with observations, evolution calculations for single planets are needed. This is obvious as no planet is observed at an age of zero. We use atmospheric and structure modells planets, as well as atmospheric loss and bloating mechanisms for giant and rocky planets to develop our understanding of planetary populations. [more] 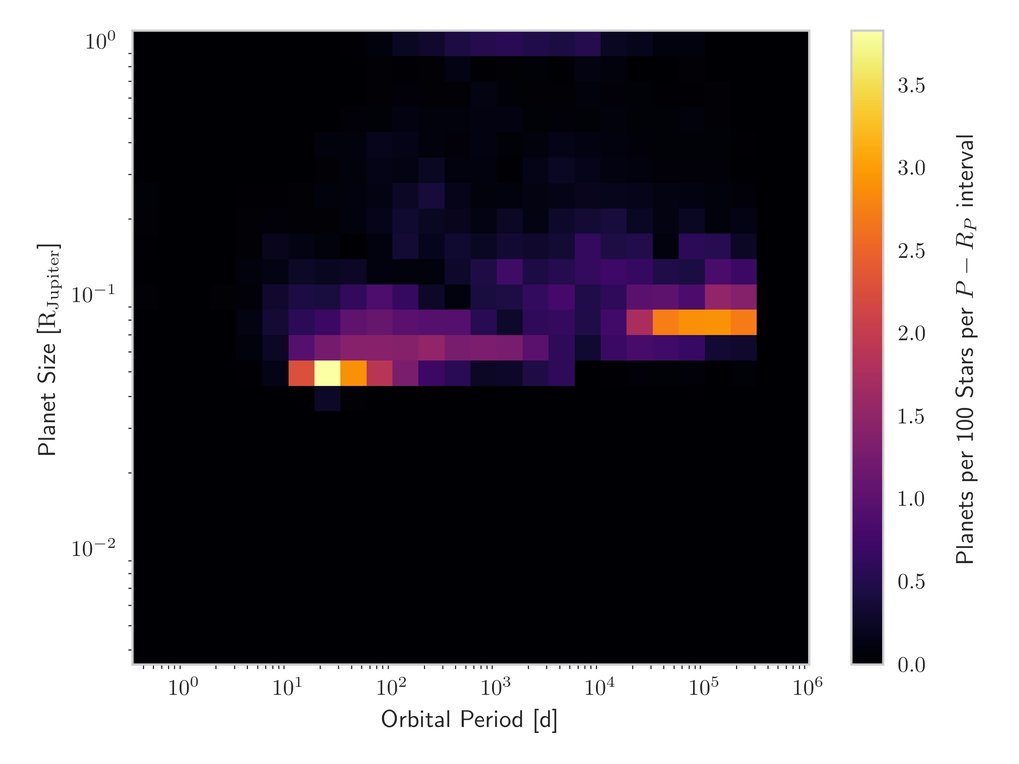 Planet Population Synthesis is an indirect approach to study the conditions necessary for planet formation and evolution. It compares the properties of observed exoplanets, e.g. mass and orbital radius, to the ones obtained from planet formation simulations.

We use parametrized models of planet formation and evolution in protoplanetary disks to produce synthetic populations of planets. By calibrating these simulations to observed exoplanet populations, we can improve our understanding of key processes such as the growth of planetesimals and their migration behavior.