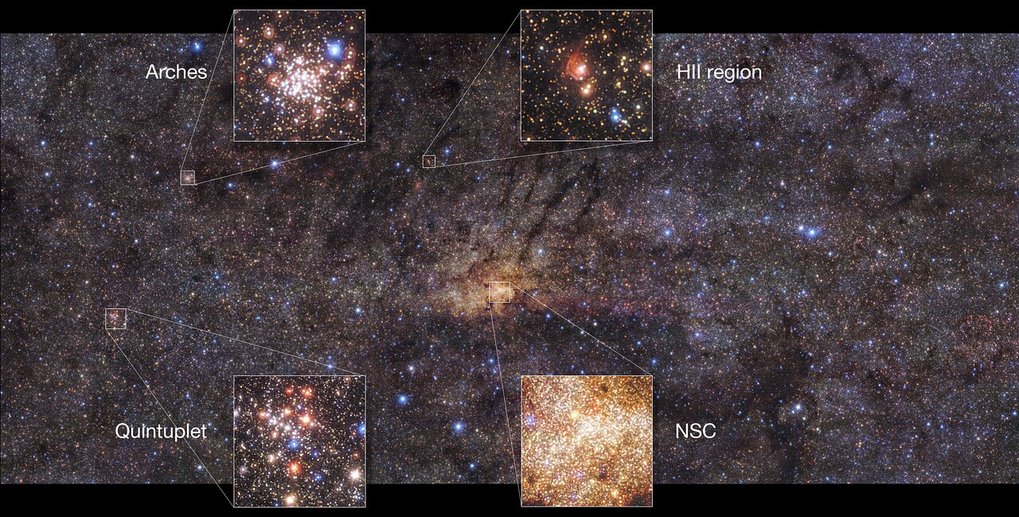 Star formation in the center of the Milky Way came in bursts, new study shows

New observations of the center of our home galaxy have allowed astronomers to reconstruct, for the first time, the history of star formation in the center of the Milky Way. Previously, it had been assumed that stars in the so-called nuclear stellar disk had formed continuously over the past billions of years. Instead, the new results imply a burst of star formation activity more than 8 billion years followed by a quiet period, and then another burst of activity about one billion years ago. The re-written evolutionary history has consequences for the formation of the bar-shaped feature of our galaxy’s disk. The results have been published in the journal Nature Astronomy.

The stars in question belong to a dense, disk-shaped region with a diameter of about 1000 light-years (roughly 1 % of the diameter of the Milky Way’s majestic disk of stars), known as the nuclear disk. This disk surrounds the Milky Way’s innermost nuclear cluster of stars and its central supermassive black hole.

With their result of two intense episodes of star formation, the researchers have rewritten part of our home galaxy’s history: Previously, it had been assumed that the stars in the central region of the Milky Way had formed gradually over the past billions of years. The new timeline has consequences for a number of other astronomical phenomena.

The brief, but intense burst of star formation activity one billion years ago is likely to be one of the most energetic events in the history of our galaxy. Hundreds of thousands of newly formed massive stars would have exploded as supernovae within millions of years.

The results also force astronomers to rethink another fundamental feature of our galaxy. The Milky Way is a barred spiral galaxy, with an elongated region estimated between 3,000 and 15,000 light-years long linking the inner ends of its two major spiral arms. Such bar structures are thought to be very efficient at funneling gas into a galaxy’s central region, which would lead to the formation of new stars.

The billions of years without star formation in the nuclear galactic disk forces astronomers to rethink this scenario. During those quiet years, gas was evidently not funneled into the Galactic center in sufficient amounts. Francisco Nogueras Lara (then Instituto de Astrofísica de Andalucía, now a post-doctoral researcher at MPIA), lead author of the article, says: “Either the galactic bar has come into existence only recently, or such bars are not as efficient in funneling gas as is commonly assumed. In the latter case, some event – like a close encounter with a dwarf galaxy – must have triggered the gas flow towards the Galactic center about one billion years ago.”

Reconstructing the formation history of the Galactic center

The reconstruction of the history of the nuclear Galactic disk makes use of some of the fundamental insights of astronomers into star formation. Stars only live for a certain span of time, which depends on their mass and chemical composition.

Whenever many stars have been born at the same time, which is a common occurrence, astronomers can look at the ensemble, plot the star’s brightness against the reddishness of their color (“colour-magnitude diagram”) and deduce how long ago the ensemble was formed. One among several age indicators is the “red clump” of stars that have already begun to fuse helium in their core regions. From the average brightness of stars in that clump, one can deduce the age of that group of stars.

Challenges of observing the Galactic center

But there is a catch: All those techniques require astronomers to study separate stars. For the Milky Way’s central regions, that is a highly challenging task. As seen from Earth, the Galactic center is hidden behind gigantic clouds of dust, requiring infrared observations to “look through” the clouds.

But then, such observations are bound to see too many stars in the Milky Way’s center! The Galactic center is very dense, with between a thousand and a hundred thousand stars in a cube with a side-length of one light-year. When astronomers observe very dense star fields of this kind, those stellar disks will overlap in the telescope image. Separating such fields into separate stars is difficult – but necessary if you want to reconstruct the formation history of the Galactic center.

The right instrument for the job

Given those challenges, when Rainer Schödel (Instituto de Astrofísica de Andalucía, PI of the GALACTICNUCLEUS survey), MPIA’s Nadine Neumayer and their colleagues began planning to tackle the history of our Milky Way’s central region in late 2014, they knew they would have to find the right instrument for the job. As Neumayer explains: “We needed a near-infrared instrument with a large field of view, able to observe the Milky Way’s central region which is in the Southern Sky. ESO’s HAWK-I instrument was ideal for our survey.” HAWK-I is an infrared camera at the 8 meter Very Large Telescope at the Paranal Observatory of the European Southern Observatory (ESO) in Chile.

For their GALACTICNUCLEUS survey, the astronomers observed the Galactic center region with HAWK-I for 16 nights managing to obtain accurate photometry of more than three million stars. Using a special technique known as holographic imaging, the astronomers were able to distinguish between stars as little as 0.2 arc seconds apart. With this accuracy, you could distinguish two one-cent coins viewed from a distance of more than 8 kilometers. Two clearly visible “red clumps” in the resulting colour-magnitude diagram allowed for the reconstruction of the formation history of the Galactic nuclear disk.

As a next step, the astronomers are now studying the influence of dust on their observations (extinction and reddening). Taking into accounts the effect of dust should allow for even more precise reconstructions of the history of our galaxy’s central regions in the future.

The research described here has been published as:

Part of this work was supported by the subgroup B8 of the Collaborative Research Center (Sonderforschungsbereich) SFB 881 “The Milky Way System” at Heidelberg University. Collaborative Research Centers are long-term research projects funded by the Deutsche Forschungsgemeinschaft (DFG) for up to 12 years. The research work of SFB 881 revolves around our own galaxy, the Milky Way, a typical spiral galaxy and hence a member of the most common class of massive galaxies in the universe. The scientists involved in the SFB investigate the origins and evolution of the Milky Way and its surroundings in order to clarify fundamental principles of galaxy formation. The SFB 881 is located at the Zentrum für Astronomie der Universität Heidelberg (ZAH) and includes scientists from the Astronomisches Rechen-Institut (ARI), the Institute of Theoretical Astrophysics (ITA) and the Landessternwarte Königstuhl (LSW). The participating non-university research institutions are the Max Planck Institute of Astronomy (MPIA) and the Heidelberg Institute for Theoretical Studies (HITS). In addition, the Haus der Astronomie (HdA) helps to make research on the Milky Way accessible to the general public.