The climate crisis is one of the defining challenges of our time. In the latest issue of the journal Nature Astronomy, astronomers including directors and staff of the Max Planck Institute for Astronomy are addressing the interactions between astronomy and anthropogenic climate change – including the "fossil fuel footprint" of astronomy research, but also the negative impact of climate change on astronomical observations. 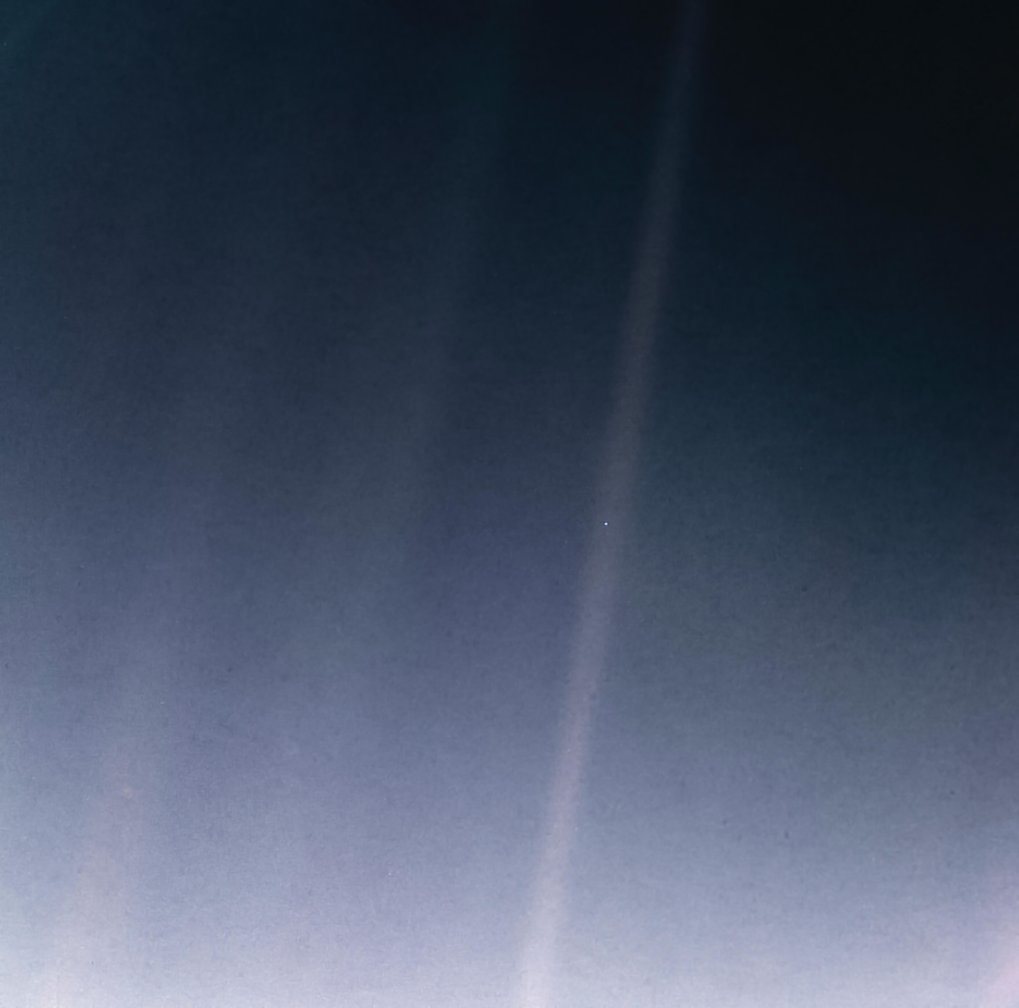 The "pale blue dot" image, Earth as photographed by the Voyager spacecraft in 1990, highlights the unique astronomical ... [more]

Astronomers are no strangers to climate change. Our sister planet Venus is a poignant example of an extremely strong greenhouse effect, with hostile surface temperatures of more than 460 degrees Celsius. And the ongoing search for planets orbiting stars other than the Sun, in combination with the immensity of astronomical distances, gives astronomers a unique perspective that underscores the statement that "there is no planet B".

Now, astronomers from around the world have applied their analytical skills to their own challenging relationship with the climate crisis. Their results have now been published in six articles in the journal Nature Astronomy. The article series developed out of the special session "Astronomy for Future" at the 2020 (virtual) conference of the European Astronomical Society.

The carbon footprint of an institute

The first step in reducing emissions is to assess the carbon footprint of an institution. In one of the articles, a team of astronomers from the Max Planck Institute for Astronomy (MPIA) in Heidelberg, has done just that for their own institute. Adding up the CO2 emissions for the year 2018, the astronomers found that they are dominated by intercontinental flights ­– to attend conferences or for in-person observing at observatories in North and South America – and electricity consumption at supercomputing facilities. Astronomers rely on supercomputers both for simulations and for data analysis.

All in all, this adds up to 18 tons of carbon dioxide per scientist, for research activities alone. For comparison: That is almost twice as much as the carbon dioxide emissions per person in Germany.

Knud Jahnke, a group leader at MPIA and lead author of the article, says: "We astronomers are responsible for our fossil fuel emissions. But reduction is rarely a question of personal choice. We need an analysis of where those emissions come from, and then figure out whether we need to take action at the institute level, at the level of the whole astronomical community, or even at the level of society as a whole in order to effect a major reduction."

The article makes several recommendations for how astronomical institutes like the MPIA could reduce their emissions. One is to move supercomputing facilities to locations where electricity is predominantly produced from renewable sources and where cooling is easier – Iceland being a possible choice. The other is a drastic reduction of research-related flights.

The question of astronomical conferences, traditionally held as in-person meetings, with many participants travelling to the event location by plane, is addressed in another one of the six articles, in which Jahnke is a co-author.

The article compares the last two annual meetings of the European Astronomical Society: The 2019 meeting held in Lyon, France, a face-to-face conference with more than 1200 attendees, and the 2020 meeting, held as a virtual event due to the world-wide pandemic, with nearly 1800 participants.

Just like for the rest of us, the pandemic is currently forcing astronomers to experiment with online formats. And while some formats, such as plenary talks, can readily move online, there is as yet no effective virtual version of the face-to-face networking, the personal contacts that a traditional conference allows. Leonard Burtscher of the University of Leiden, first author of the paper, says: "From a climate perspective, the solution could be face-to-face conferences happening at several locations at once, allowing participants to travel by train. Plenary talks would be online, while the gathering of scientists at each `conference hub' would allow for personal interactions."

The influence of climate change on astronomy

While these two articles focus on the impact of astronomical research activities on climate change, a third article provides a complementary perspective: There, the astronomers assessed the extent to which climate change is affecting astronomy, more specifically the quality of astronomical observations.

For their analysis, they focused on one of the most productive modern observation sites: the Paranal Observatory of the European Southern Observatory (ESO) in Chile, for which there is an exhaustive data set collected by environmental sensors over the last three decades.The Paranal site has seen an increase of the average temperature by 1.5º C over the past four decades, slightly above the world-averaged value of 1º C since the pre-industrial era.

On an engineering level, this creates difficulties with telescope cooling. The enclosure of the Very Large Telescope (VLT) on Paranal is cooled during the day to night-time temperatures in order to avoid internal turbulence when opening the dome at sunset, which would degrade the observations. For sunset temperatures warmer than 16º C, complete cooling is impossible, as the cooling system reaches its limitations, resulting in some blurring of observations. Such warmer days have become more frequent with increased average temperature.

Last but not least, the cutting-edge instruments installed at the telescopes of the VLT are sensitive to specific properties of the atmosphere. Low water vapor content is crucial for infrared observations. Paranal is currently one of the driest places on Earth. For specific types of observations, air turbulence affecting the passage of light plays a role. Paranal is located below a strong jet stream layer whose strength is linked to the amplitude of El Niño events. While the available data shows no significant trends so far, El Niño events are expected to increase in amplitude over the next decades as the climate crisis progresses. 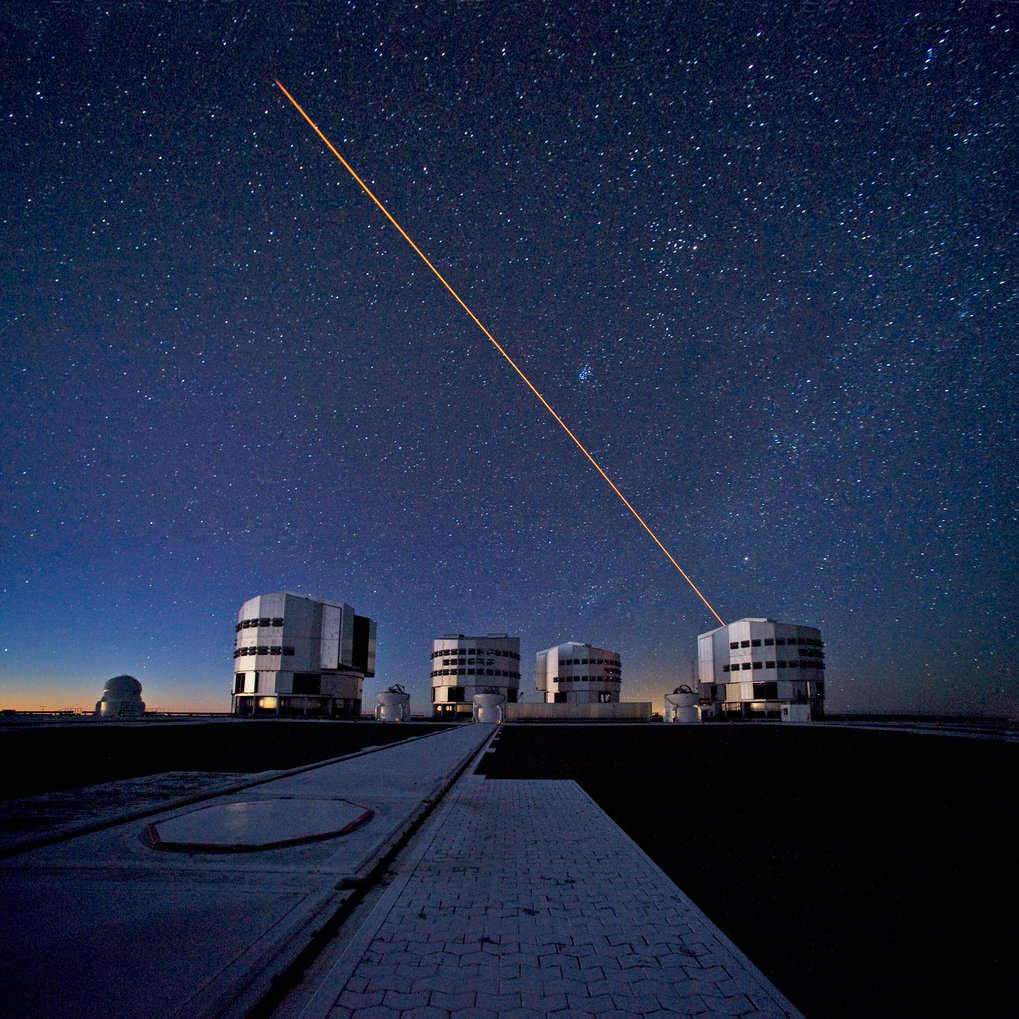 The four 8-m telescopes and four auxiliary telescopes at ESO's Paranal observatory in Chile. In planning for the future ... [more]

Acting on the information

For future telescopes, such as the Extremely Large Telescope (ELT) with its 39-meter mirror currently under construction in sight of Paranal, astronomers will have to take account of these and other effects – cautiously evaluating how observation conditions might change for the most pessimistic projections of an increase of about 4ºC over the next century and changes foreseen in global circulation with, for instance, stronger El Niño events and more frequent high-humidity events.

With their articles, the astronomers are hoping to facilitate change within their community. MPIA's Faustine Cantalloube, lead author of the article on how the climate crisis affects observations, says: "As astronomers, we are immeasurably lucky to work in a fascinating field. With our unique perspective on the universe, it is our responsibility to communicate, inside and outside our community, about the disastrous consequences of anthropogenic climate change on our planet and our society."

Now it is up to the scientific community, as well as to the authorities that create the environment for scientific research, to act on this information. The newly published articles show a way forward – continuing astronomy research, with its unique capability of putting planet Earth and its environment in a broader perspective, but reducing the carbon footprint of that research.

The results reported here have been published as K. Jahnke et al., “An astronomical institute’s perspective on meeting the challenges of the climate crisis”; L. Burtscher et al., “The carbon footprint of large astronomy meetings” and F. Cantalloube et al., “The impact of climate change on astronomical observations” in the September 10 edition of the journal Nature Astronomy.

Before the embargo lifts, the articles can be obtained by accredited journalists via the Nature portal https://press.nature.com, or by contacting press@nature.com