An international group of astronomers, led by Martin Schlecker of the Max Planck Institute for Astronomy, has found that the arrangement of rocky, gaseous and icy planets in planetary systems is apparently not random and depends on only a few initial conditions. The study, which will appear in the scientific journal Astronomy & Astrophysics, is based on a new simulation that tracks the evolution of planetary systems over several billion years. Planetary systems around Sun-like stars, which produce in their inner regions super-Earths with low water and gas content, very often form a planet comparable to our Jupiter on an outer orbit. Such planets help to keep potentially dangerous objects away from the inner regions. 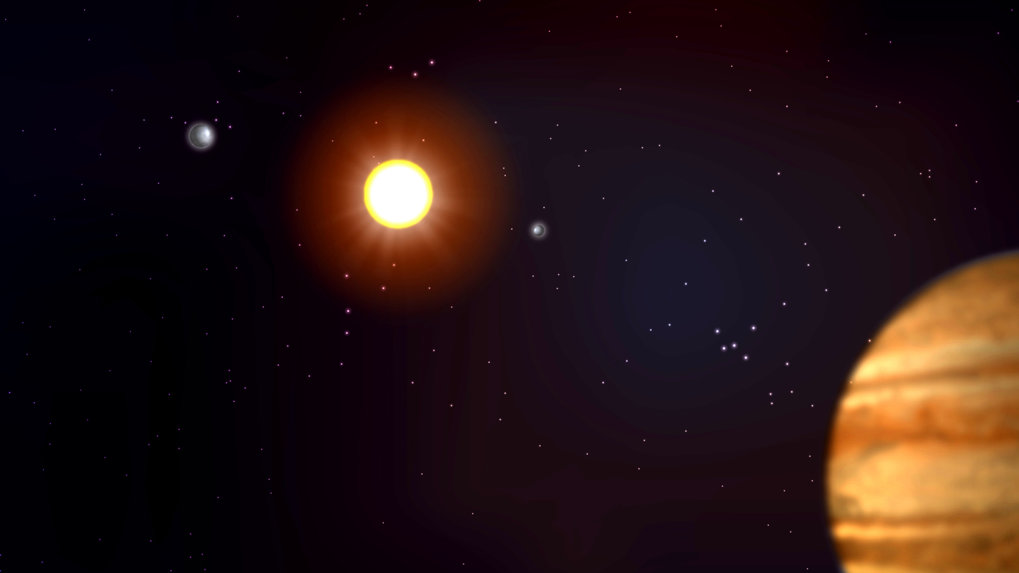 Scientists suspect that the planet Jupiter played an important role in the development of life on Earth, because its gravity often deflects potentially dangerous asteroids and comets on their orbits into the zone of rocky planets in a way that reduces the number of catastrophic collisions. This circumstance therefore repeatedly raises the question whether such a combination of planets is rather random, or whether it is a common result of the formation of planetary systems.

Scientists from the Max Planck Institute for Astronomy (MPIA) in Heidelberg, the University of Bern and the University of Arizona have now found strong evidence that rocky planets similar to Earth occur conspicuously often together with a Jupiter-like planet that is in a wide orbit. “We call such gas giants cold Jupiters. They grow at a distance from the central star, where water exists in the form of ice,” explains Martin Schlecker, a doctoral student at the Max Planck Institute for Astronomy (MPIA) in Heidelberg, who led the study. The Earth-like planets studied are so-called dry super-Earths, i.e. rocky planets larger and more massive than the Earth, which have only a thin atmosphere and hardly any water or ice. They populate the inner, i.e. temperate zone of the planetary systems and are very similar to the Earth except for their size. “Also, the Earth is, despite the enormous oceans and the polar regions, with a volume fraction for water of only 0.12% altogether a dry planet,” Schlecker points out.

To find a cold Jupiter together with an ice-rich super-Earth in the inner region is therefore almost impossible. Furthermore, dense, extended gas envelopes are mainly found in massive super-Earths.

Simulations provide insights into processes that are difficult to measure

These conclusions are based on a statistical evaluation of new simulations of 1000 planetary systems that are evolving in a protoplanetary disk around a Sun-like star. These simulations are the latest achievement in a long-standing collaboration between the University of Bern and MPIA to study the origins of planets from a theoretical perspective. Starting from random initial conditions, e.g. for the masses of gas and solid matter, the size of the disk and the positions of the seed cells of new planets, the scientists tracked the life cycle of these systems over several billion years. “During the simulations, the planetary embryos collected material, grew into planets, changed their orbits, collided or were ejected from the system,” Christoph Mordasini from the University of Bern and co-author of the research paper describes the simulated processes. The simulated planetary systems eventually had planets of different sizes, masses and compositions on different orbits around the central star.

Hubert Klahr, head of the working group on the theory of planet formation at MPIA, explains: “Such simulations support the investigation of exoplanetary systems, since planets like cold Jupiters require a lot of time to orbit their mother star on their wide orbits”. This makes it difficult to find them through observation, so the search for exoplanets does not realistically reflect the actual composition of planetary systems. Astronomers are more likely to find high-mass planets in close orbits around low-mass stars. “Simulations, on the other hand, are in principle independent of such limitations,” adds Klahr.

Observations and simulations do not match

“We wanted to verify a surprising finding following observations made in recent years that planetary systems with a cold Jupiter almost always contain a super-Earth,” says Schlecker. Conversely, about 30% of all planetary systems in which super-Earths are formed also appear to have a cold Jupiter. It would be plausible to expect that massive planets are more likely to disrupt planetary systems during their formation in such a way that the formation of other planets is hindered. However, these cold Jupiters seem to be sufficiently far away from the interiors, so that their influence on the development seems to be rather small.

One explanation has to do with the rate at which gas planets gradually migrate inward. Planet formation theory seems to predict higher rates than observed, leading to an increased accumulation of gas giants on orbits of intermediate distance. In the simulations, these “warm Jupiters” interfere with the inner orbits and cause more super-Earths to be ejected or even collide in gigantic collisions. With a slightly lower tendency of the simulated gas planets to migrate, more of the super-Earths would remain, which would be more compatible with the observations.

Now, the observations only roughly distinguish between different types of super-Earths, because their exact characterisation would require precise measurements that are hardly possible with today's instruments. In the simulations of the Bern-Heidelberg group, however, this is achieved by tracing the path of a planet within the protoplanetary disk and its encounters with other planets. “We found a significant excess of planetary systems containing both a cold Jupiter and at least one dry super-Earth, i.e. with little water or ice, and a thin atmosphere at most,” Schlecker notes. A comparison with observational data is difficult, because of the approximately 3200 planetary systems known to date, only 24 have been proven to be comparable with such a constellation. Nevertheless, the available results are in good agreement. On the other hand, there are hardly any planetary systems in which super-Earths with a high proportion of ice and a cold Jupiter exist simultaneously. 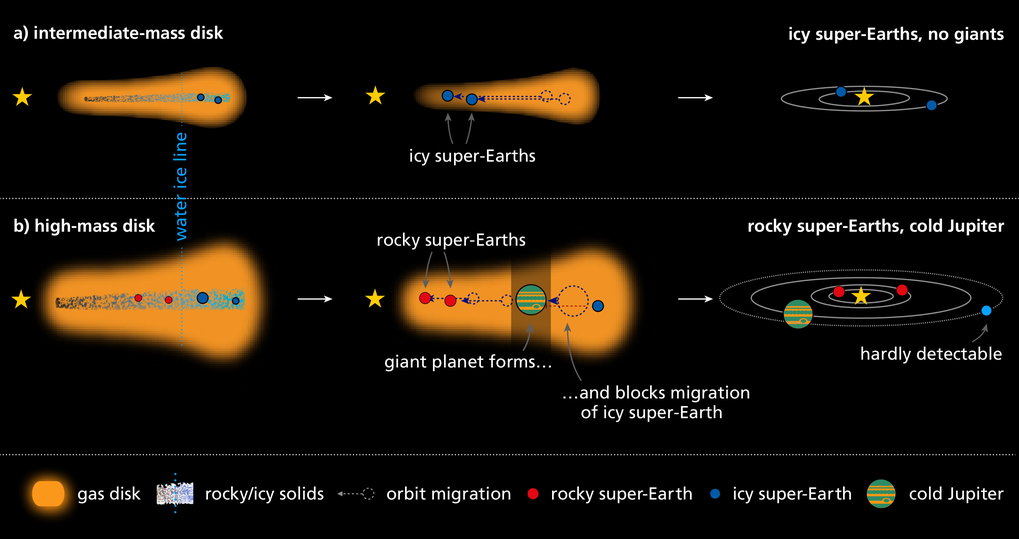 Based on these findings, the astronomers of this study have developed a scenario that could explain the formation of these quite different types of planetary systems. As the simulations show, the final constellation is mainly determined by the mass of the protoplanetary disk, i.e. the amount of material available for the accretion of planets.

In disks with medium mass there is not enough material in the inner, warm region to produce super-Earths. At the same time, the amount is also too small in the outer parts beyond the snowline, where water is present in frozen form and the proportion of ice chunks is quite large, to form massive planets like Jupiter. Instead, the material there condenses into super-Earths with a high proportion of ice with a possibly extended gas envelope. These super-Earths gradually migrate inwards. In contrast, there is enough material in massive disks to form both Earth-like rocky planets at moderate distances from the central star and cold giant planets beyond the snowline. These rocky planets are poor in ice and gas. Outside the orbit of the cold Jupiter, ice-rich super-Earths can form, but their migration in the radial direction is limited by the influence of the giant planet. Therefore, they cannot enter the inner, warm zone.

Verifying the prediction is only possible in a few years time

However, it will only be possible to verify this concept with powerful telescopes such as the Extremely Large Telescope (ELT) of the European Southern Observatory or the James Webb Space Telescope (JWST). Both are expected to be operational within this decade. “Theoretical predictions must be able to fail in the face of empirical experience,” Schlecker demands. “With the next-generation instruments that are about to be deployed, we will be able to test whether our model will hold up or whether we have to go back to the drawing boards.”

In principle, this result could also apply to such dry rocky planets, which have roughly the size and the mass of the Earth. So, it might not be a coincidence that the solar system contains a planet like Jupiter as well as Earth. However, the measuring devices available today are not sensitive enough to reliably detect such Earth twins in large numbers by means of observations. For this reason, astronomers must currently still largely confine themselves to studying the Earth's massive counterparts. Only with the ELT and the JWST can we expect progress in this direction.