A three-dimensional map of dust in the Milky Way 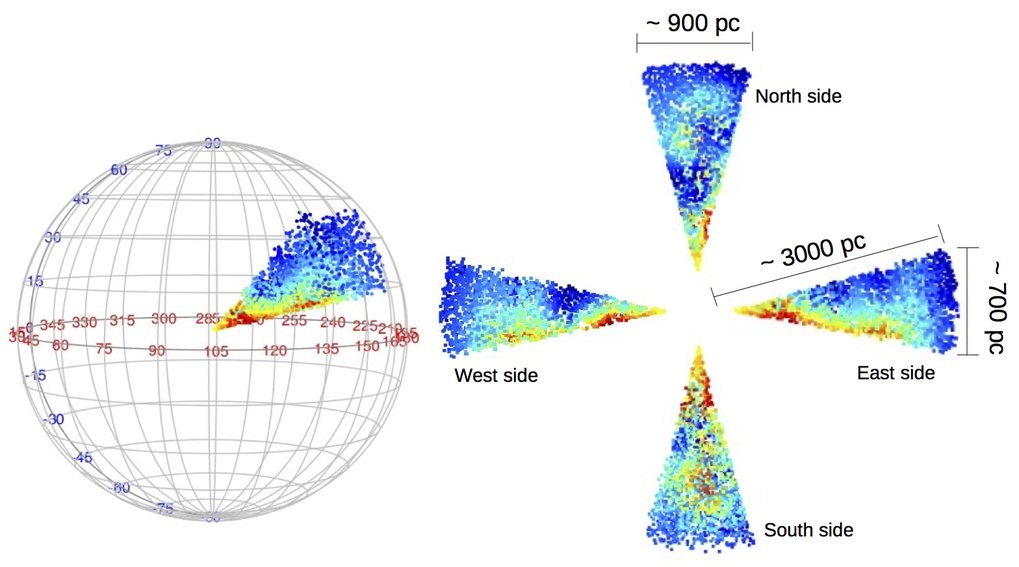 Interstellar dust is an integral part of a galaxy. In the cycle of matter, gas and dust are ejected from evolving stars, and eventually this material will form new stars. Dust also attenuates light through reddening and extinction, thereby complicating our interpretation of stellar photometry and spectroscopy, and it imposes complex selection functions on surveys. Any survey with or of stars must account for the effects of interstellar dust.

Numerous studies have been undertaken over the years to improve our knowledge of this component of the interstellar medium (ISM), most of which consider each line of sight (LoS) independently: they do not propagate information between neighbouring LoS, even though the dust causing the extinction is likely to be correlated.

In our paper, http://adsabs.harvard.edu/abs/2017A%26A...598A.125R, we present a non-parametric model for inferring the three-dimensional (3D) distribution of dust density in the Milky Way. Our approach uses the extinction measured towards stars at different locations in the Galaxy at approximately known distances. Each extinction measurement is proportional to the integrated dust density along its LoS. Making simple assumptions about the spatial correlation of the dust density, we can infer the most probable 3D distribution of dust across the entire observed region, including along sight lines which were not observed. This is possible because our model employs a Gaussian process to connect all LoS.

We apply our method to APOKASK data and find dust densities for a small portion of sky which does not show any LoS effects. The ultimate goal of the project is to apply the method (after some further improvements) on Gaia data and map the dust distribution in the Galaxy.