Bringing the Telescope Jitters under Control: A Unique Service at the LBT

Large mechanical structures such as the Large Binocular Telescope (LBT) on Mt. Graham in Arizona are susceptible to vibrations. As the telescope is moved, but also as it is influenced by wind, the structure begins to oscillate slightly. Yet even very slight vibrations can jeopardize one of the LBT's key objectives: to combine the two 8.4m primary mirrors on the LBT mount to act like a single, much larger telescope. In this mode, achieved by what is called interferometry, the LBT could discern details otherwise accessible only to a telescope with a giant 23 meter mirror. Structural vibrations can all but spoil the interferometric combination, severely limiting the achievable resolution, and leading to a substantial loss of detail.

Enter "OVMS", the "Optical path difference and Vibration Monitoring System". Installed in late March and now officially handed over to the LBT observatory, this system with its 30 vibration sensors delivers high-precision measurements of the vibration-induced movements of the telescope mirrors. The measurements can be used to control the optical instruments installed at the LBT for astronomical observations, correcting for the vibrations' deleterious effects, and they are particularly suitable for controlling the LBT interferometers.

OVMS was developed in a collaboration between the Max Planck Institute for Astronomy and Steward Observatory in Tucson, Arizona. The scientists and engineers involved are mainly those who are building the interferometric cameras LINC-NIRVANA and LBTI (the German-Italian and US-American interferometers for the LBT, respectively). From its inception, the project was also supported by the LBT observatory. The collaboration is led by the MPIA/LINC-NIRVANA team, which is responsible for the overall project coordination. The MPIA team also undertook the development of the software components, including the data acquisition system, while the LBTI/Steward team saw to the development, procurement, and installation of the hardware. 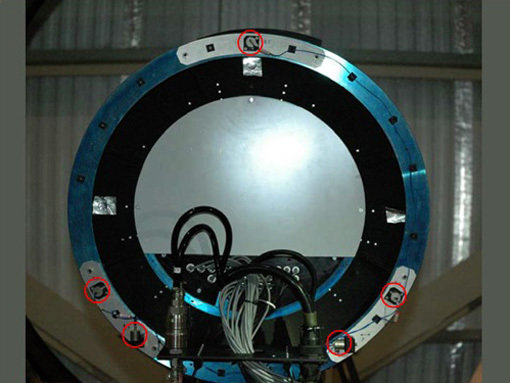