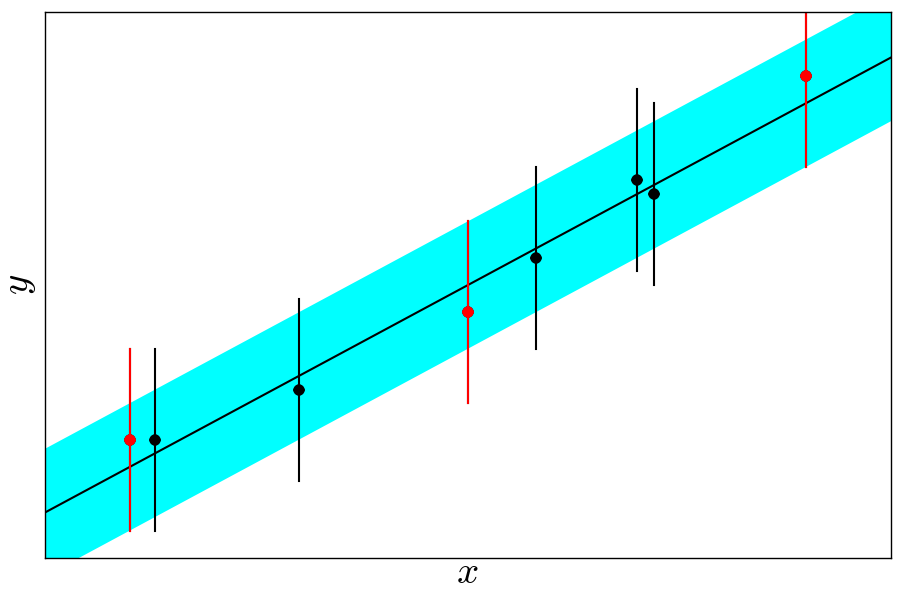 Support Vector Regression (SVR) is a standard machine-learning algorithm. We adopt it within GSP-Phot in order to obtain a first estimate of the stellar atmospheric parameters given the observed BP/RP spectra. SVR has two major advantages: First, SVR does not require any kind of initial guess. Second, SVR is extremely fast to provide parameter estimates from a given BP/RP spectrum. The stellar parameters estimated by SVR from the given BP/RP spectra are then used as initial guess for the other GSP-Phot algorithms Ilium and Aeneas.

The SVR algorithm belongs to the family of support vector machines (SVM). Like all SVMs, the crucial idea of SVR is to maximise the width of a margin (cyan area in Figure 1) for given training data (in our case synthetic BP/RP spectra with known stellar parameters) in order to provide a model which has optimal generalisation ability. The margin will usually be defined by only a handful of training spectra, the so-called support vectors (red data points in the figure). All other training spectra which are not support vectors become irrelevant, which makes SVR highly robust against outliers in the training data.