Astronomers led by Eduardo Bañados of the Max Planck Institute for Astronomy have discovered a gas cloud that contains information about an early phase of galaxy and star formation, merely 850 million years after the Big Bang. The cloud was found serendipitously during observations of a distant quasar, and it has the properties that astronomers expect from the precursors of modern-day dwarf galaxies. When it comes to relative abundances, the cloud's chemistry is surprisingly modern, showing that the first stars in the universe must have formed very quickly after the Big Bang. The results have been published in the Astrophysical Journal. 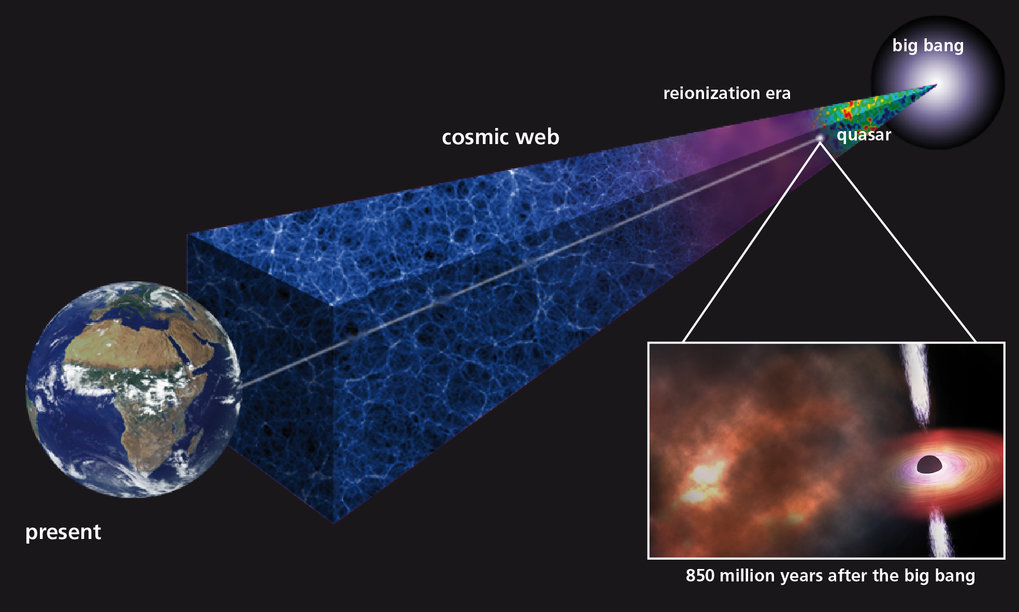 When astronomers look at distant objects, they necessarily look back in time. The gas cloud discovered by Bañados et al. is so distant that its light has taken nearly 13 billion years to reach us; conversely, the light reaching us now tells us how the gas cloud looked nearly 13 billion years ago, no more than about 850 million years after the Big Bang. For astronomers, this is an extremely interesting epoch. Within the first several hundred million years after the Big Bang, the first stars and galaxies formed, but the details of that complex evolution are still largely unknown.

This very distant gas cloud was a fortuitous discovery. Bañados, then at the Carnegie Institution for Science, and his colleagues were following up on several quasars from a survey of 15 of the most distant quasars known (z³6.5), which had been prepared by Chiara Mazzucchelli as part of her PhD research at the Max Planck Institute for Astronomy. At first, the researchers just noted that the quasar P183+05 had a rather unusual spectrum. But when Bañados analyzed a more detailed spectrum, obtained with the Magellan Telescopes at Las Campanas Observatory in Chile, he recognized that there was something else going on: The weird spectral features were the traces of a gas cloud that was very close to the distant quasar – one of the most distant gas clouds astronomers have yet been able to identify.

Lit up by a distant quasar

Quasars are the extremely bright active nuclei of distant galaxies. The driving force behind their luminosity is the galaxy’s central supermassive black hole. Matter swirling around that black hole (before falling in) heats up to temperatures reaching hundreds of thousands of degrees, giving off enormous amounts of radiation. This allows astronomers to use quasars as background sources to detect hydrogen and other chemical elements in absorption: If a gas cloud is directly between the observer and a distant quasar, some of the quasar’s light will be absorbed.

Astronomers can detect this absorption by studying the quasar’s spectrum, that is, the rainbow-like decomposition of the quasar’s light into the different wavelength regions. The absorption pattern contains information about the gas cloud’s chemical composition, temperature, density and even about the cloud’s distance from us (and from the quasar). Behind this is the fact that each chemical element has a “fingerprint” of spectral lines – narrow wavelengths region in which that element’s atoms can emit or absorb light particularly well. The presence of a characteristic fingerprint reveals the presence and abundance of a specific chemical element.

Not quite the cloud they were looking for

From the spectrum of the gas cloud, the researchers could immediately tell the distance of the cloud, and that they were looking back into the first billion years of cosmic history. They also found traces of several chemical elements including carbon, oxygen, iron, and magnesium. However, the amount of these elements was tiny, about 1/800 times the abundance in the atmosphere of our sun. Astronomers summarily call all elements heavier than helium “metals;” this measurement makes the gas cloud one of the most metal-poor (and distant) systems known in the universe. Michael Rauch from the Carnegie Institution of Science, who is co-author of the new study, says: "After we were convinced that were were looking at such pristine gas only 850 million years after the Big Bang we started wondering whether this system could still retain chemical signatures produced by the very first generation of stars."

Finding these first generation, so-called “population III” stars is one of the most important goals in reconstructing the history of the universe. In the later universe, chemical elements heavier than hydrogen play an important role in letting gas clouds collapse to form stars. But those chemical elements, notably carbon, are themselves produced in stars, and flung into space in supernova explosions. For the first stars, those chemical facilitators would simply not have been there, since directly after the Big Bang phase, there were only hydrogen and helium atoms. That is what makes the first stars fundamentally different from all later stars.

The analysis showed that the cloud’s chemical make-up was not chemically primitive, but instead the relative abundances were surprisingly similar to the chemical abundances observed in today’s intergalactic gas clouds. The ratios of the abundances of heavier elements were very close to the ratios in the modern universe. The fact that this gas cloud in the very early universe already contains metals with modern relative chemical abundances poses key challenges for the formation of the first generation of stars.

So many stars, so little time

This study implies that the formation of the first stars in this system must have begun much earlier: the chemical yields expected from the first stars had already been erased by the explosions of at least one more generation of stars. A particular time constraint comes from supernovae of type Ia, cosmic explosions that would be required to produce metals with the observed relative abundances. Such supernovae typically need about 1 billion years to happen, which puts a serious constraint on any scenarios of how the first stars formed.

Now that the astronomers have found this very early cloud, they are systematically looking for additional examples. Eduardo Bañados says: “It is exciting that we can measure metallicity and chemical abundances so early in the history of the universe, but if we want to identify the signatures of the first stars we need to probe even earlier in cosmic history. I am optimistic that we will find even more distant gas clouds, which could help us understand how the first stars were born.”

The results described here have been published in Bañados et al., “A metal–poor damped Lyα system at redshift 6.4,” in the Astrophysical Journal.