The following instruments are available for observations: 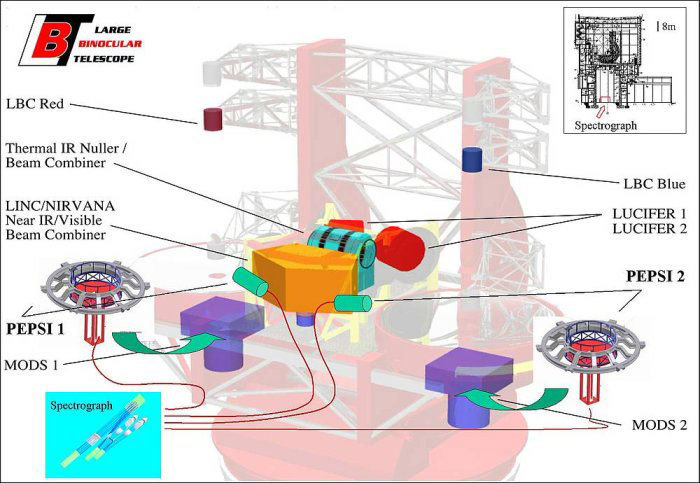 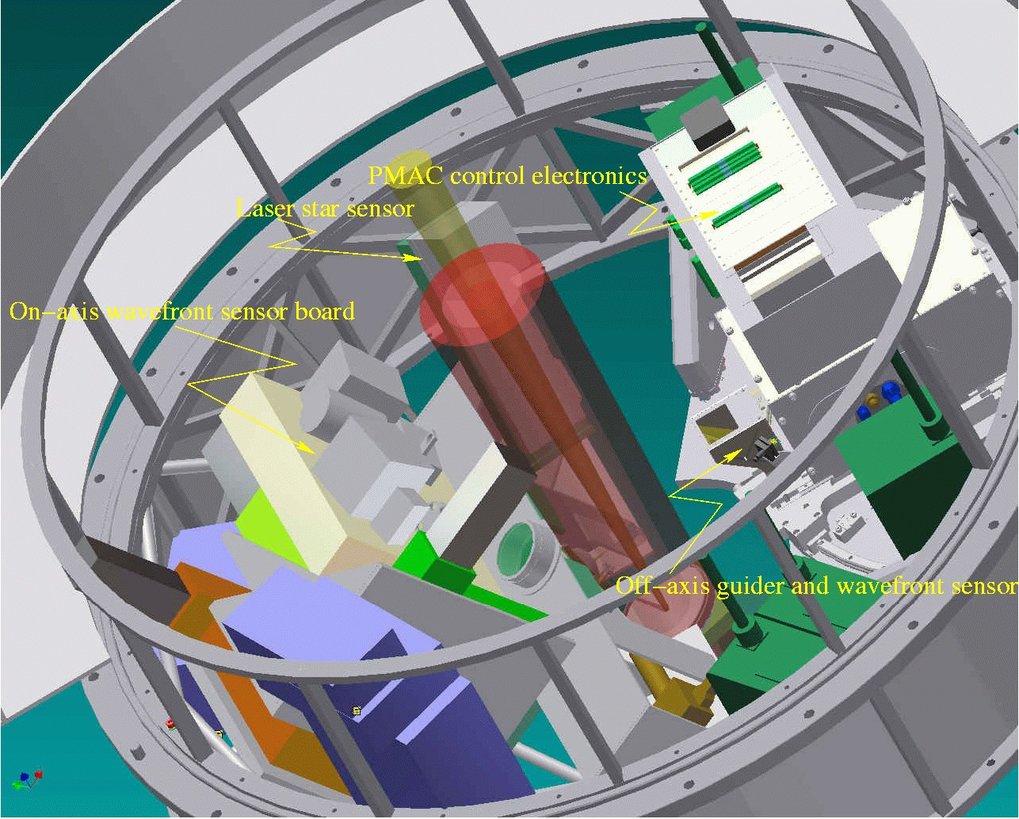 The Acquisition, Guiding- and Wavefront-sensing units (AGW) control the tracking of the telescope by means of a natural guide star.

The main degradations of the image quality result, however, from aberrations which result from turbulence in the Earth atmopshere. These aberrations are the main reason why astronomical observations from the ground do not reach the theoretical spatial resolution of a telescope, which is given by its diffraction limit. 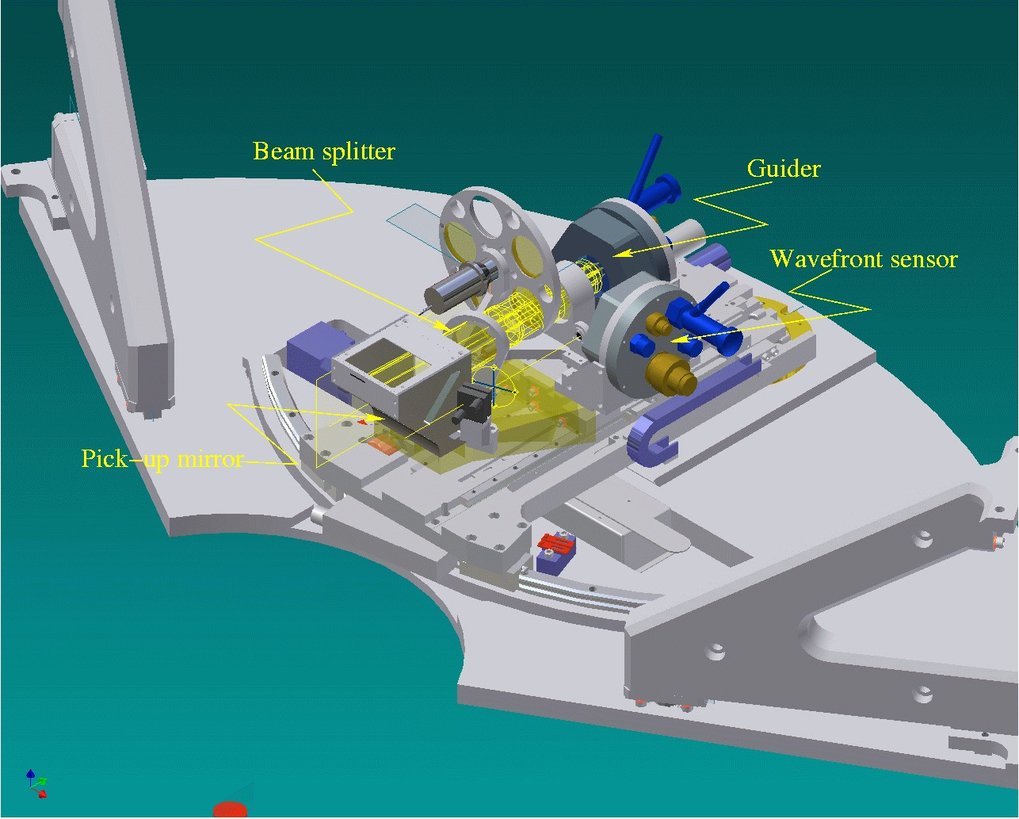 Their removal requires a significantly faster correction than what is possible with an active mirror support. At the LBT, the adaptive corrections are achieved by means of deformable secondary mirrors, which have a diameter of 0.9 m and which are supported by a total of 672 actuators each.

Corrections of the surface of the secondary mirrors can be done up to a rate of 1000/sec. The concept is based on a deformable secondary mirror which has been developed for the Multiple Mirror Telescope (MMT).

All instruments will be mounted permanently at the telescope, and are selected by tertiary mirrors mounted on swing arms, or they are mounted on swing arms themselves. This allows to change from one instrument to another in a very short period of time (about 15 minutes), thus allowing for instrument change during a night should the scientific programme or other factors such as weather or technical problems so require.

The Large Binocular Cameras LBC already introduced have been developed in an Italian consortium and will be the first science instruments at the LBT. Both cameras are not identical, though, as one is optimised for the red wavelength region and the other for the blue wavelength region.

LUCIFER can be used both as a camera as well as a medium-resolution multi-object spectrograph in the near infrared. LUCIFER has been developed within the LBTB.

'Apart from many interesting scientific programmes, LUCIFER will allow a very detailed investigation of a large number of galaxies in different evolutionary stages' says Immo Appenzeller, former director at the Landessternwarte Königstuhl. 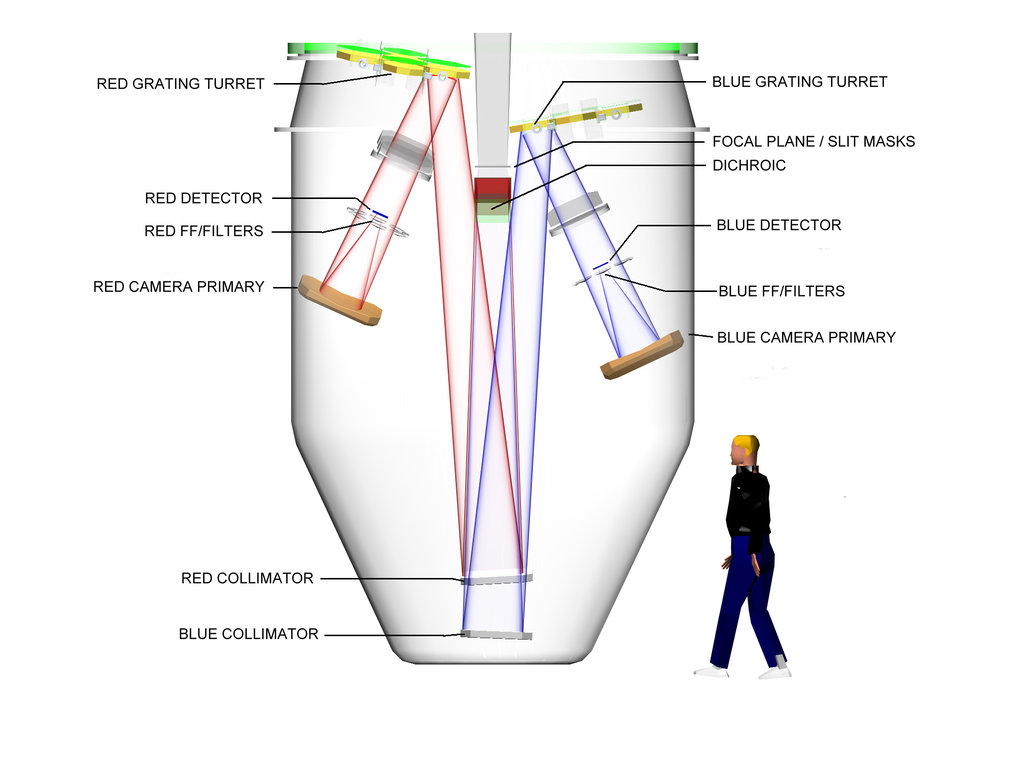 MODS is being developed at the Ohio State University and allows for low- and medium-resolution spectroscopy in the optical wavelength region. MODS hosts a double spectrograph with two arms for the red and the blue wavelength region.

Together, the pairs LUCIFER, MODS, and LBC make up the workhorse instrumentation at the LBT. Apart from these facility instruments, there are a number of visitor and strategic instruments available. 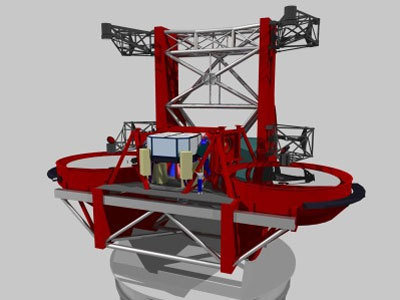 The Astrophysical Institute Potsdam builds PEPSI, a very high-resolution optical spectrograph located in the telescope basement. Two circular and linear polarisers at two permanent focal stations bring the light via a total of 16 glass fibres to the spectrograph.

The full potential of the LBT is, however, only taken advantage of once the two interferometric beam combiners LINC-NIRVANA and LBTI are available. Both instruments work as interferometers and combine, in a coherent way, the light from both main mirrors, thus achieving a spatial resolution of a 23 m mirror. 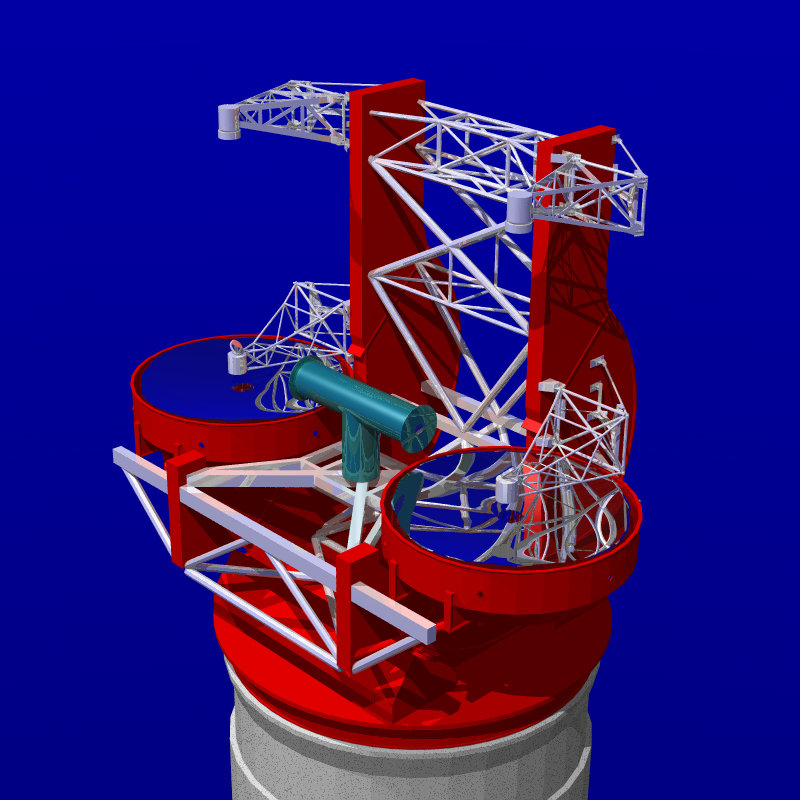 The two instruments complement each other in wavelength. LINC-NIRVANA works in the near-infrared wavelength domain while LBTI operates in the thermal infrared at ten microns.