Library of galaxy histories reconstructed from motions of stars

The motions of stars in a galaxy are like a history book, yielding information about how the galaxy has grown over time. Now a group of astronomers has assembled a library of such galaxy history books. Their data for 300 galaxies showcases the diversity of the various ways different galaxies came into being over the past billions of years. This is the first large-scale library of galactic histories, and it is particularly important for astronomers running simulations of cosmic structure formation – since those simulations can now be checked against a large set of observations. The results have been published in the journal Nature Astronomy on January 1, 2018. 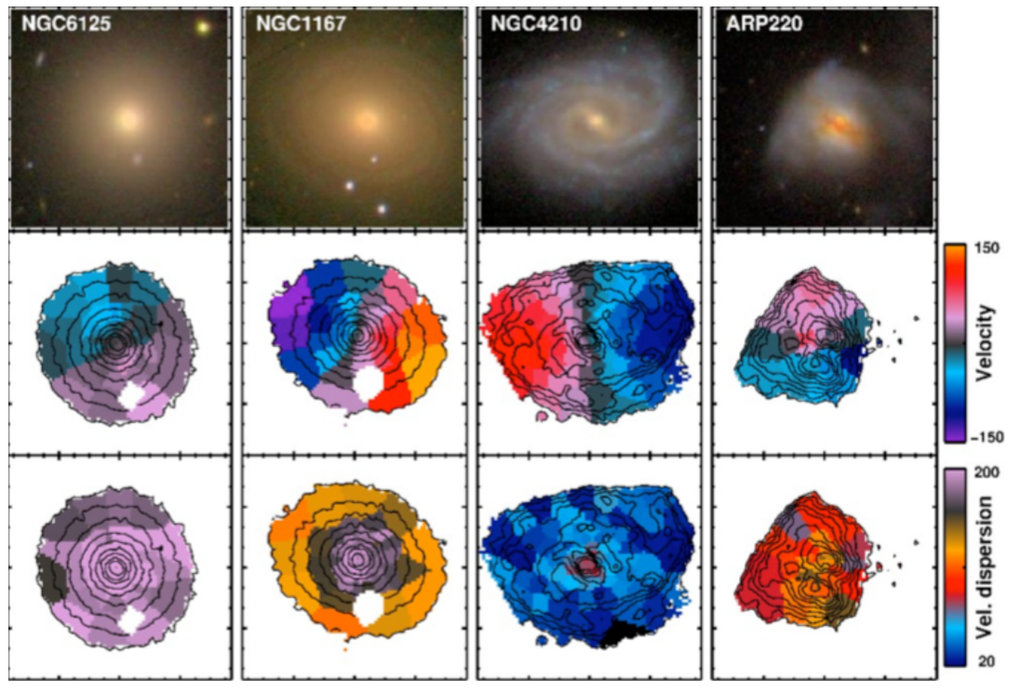 For stars in galaxies, there are two kinds of basic motion. Some are orbiting the center of the galaxy in a regular way – just like our Sun, and billions of other stars, orbit the center of our home galaxy, the Milky Way, in an ordered disk. Other stars have randomly oriented, elongated orbits, with no clear sense of rotation. Using data from a large-scale survey, a group of researchers led by Ling Zhu (Max Planck Institute for Astronomy [MPIA]), was able to reconstruct the typical orbits of stars in galaxies. The properties of these orbits tell a story about how each galaxy came into being, and are important for testing models of galaxy formation.

The data is part of the CALIFA survey, a systematic spectroscopic study of over 600 galaxies undertaken with the PMAS spectrograph at the 3.5 meter telescope of Calar Alto Observatory in Spain. As part of the survey, the astronomers have created velocity maps of 300 galaxies, showing how stars in different parts of the galaxy move towards us or away from us.

The researchers differentiated between near-circular stellar orbits, which they dub "cold orbits," and highly elongated "hot orbits" typical for random, disordered motion of stars. By fitting various models to their data, the researchers were able to show that cold orbits are prevalent among the smaller galaxies, whose stars have a combined mass of about 10 billion times the mass of the sun. In the largest galaxies with over 100 billion solar masses, hot orbits are much more common. Overall, most stars are on "warm" orbits in between the two extremes. 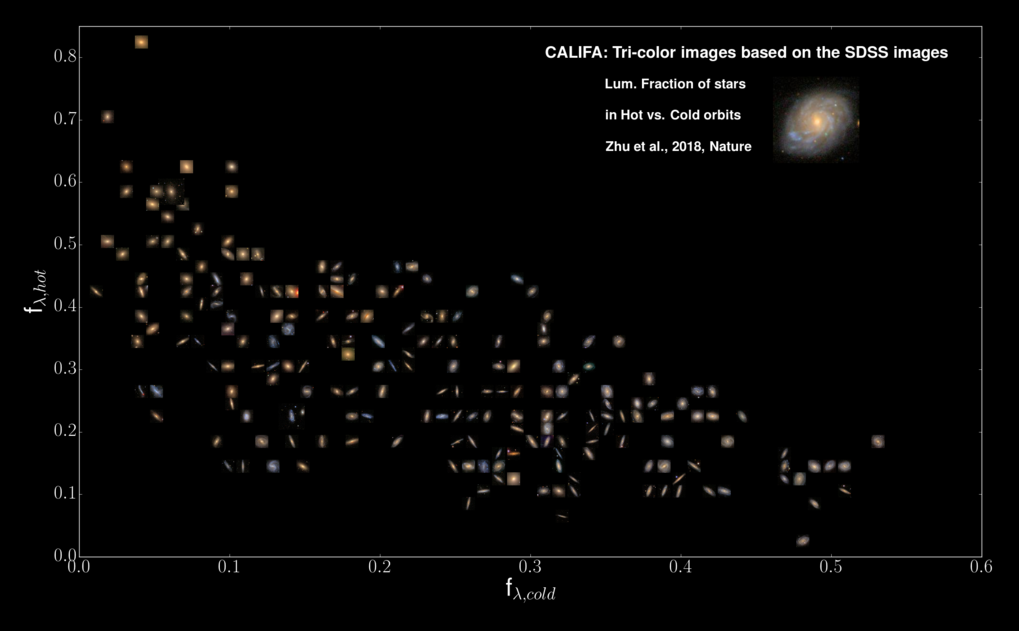 These motion maps contain telltale clues about a galaxy's formation history. Galaxies grow larger over billions of years by merging with other galaxies. Some galaxies, which have repeatedly accreted smaller galaxies, but never merged with another galaxy of similar size as themselves, will typically feature a thin, rotating disk of stars. Our own home galaxy, the Milky Way, is such a disk galaxy. On the other hand, if two galaxies of about equal mass merge, the result will be an elliptical galaxy, consisting of a jumble of stellar orbits oriented every which way.

Disk galaxies have a greater proportion of colder stellar orbits, given the orderly rotation of disk stars. The astronomers find that the jumbled orbits within elliptical galaxies are not circular orbits at various orientations but overwhelmingly hot orbits. In that way, the stellar orbit measurement can reliably distinguish between disk-like galaxies (colder orbits) and elliptical-like galaxies (hot orbits) – even in cases where just looking at an image of the galaxy will not allow astronomers to make that distinction.

Put differently: By measuring stellar orbits, the researchers will be able to tell whether a galaxy's past has been a quiet succession of smaller mergers only, or shaped by a violent major merger. The researchers have found a novel and accurate method of reading off a galaxy's history – their survey with its data sets for 300 galaxies turns out to be the largest existing library of galaxy history books!

For researchers simulating the formation and evolution of galaxies, the new results are a treasure trove of new observational constraints. The CALIFA survey was carefully designed from the beginning to yield a representative sample of galaxies. In that way, astronomers simulating galaxy evolution can now directly test whether or not their simulations give the correct predictions for the prevalence, or not, of hot, cold or warm orbits among galaxies of different masses.

The work described here is published as Zhu et al., "The stellar orbit distribution in present-day galaxies inferred from the CALIFA survey" in Nature Astronomy.

Link to the article

Calar Alto Observatory was founded in 1979 and is located in Andalusia, Spain. It is operated jointly by the Max Planck Institute for Astronomy (MPIA) and the Astrophysical Institute of Andalusia (IAA-CSIC, Granada, Spain). The Observatory has granted 250 observing nights over the course of three years, using the 3.5 metre telescope for the CALIFA survey. This project is a joint effort of more than 80 scientists from 25 different research institutes in 13 different countries world wide.

The integral field spectrograph used for the CALIFA survey at Calar Alto Observatory, PMAS (in a special configuration called PPAK), uses more than 350 optical fibres to cover a field of view of one square arcminute (equivalent to the apparent size of a 1 euro coin placed at a distance of approximately 80 metres). This allows a complete extended object, such as a galaxy, to be fully mapped in detail in just one exposure.

For the CALIFA survey, care has been taken to select the possible observation targets at random from the overall population of galaxies. In that way, the galaxies under study should be representative of the whole: Statistical conclusions from the analysis of their data should thus allow astronomers to draw conclusions about local galaxies in general.