Two Earth-like planets around one of the smallest stars, and a slim chance someone there might see Earth

An international team of astronomers has found two Earth-like planets around one of the smallest known stars known as “Teegarden’s star.” The planets, which orbit in the star’s habitable zone where liquid water is possible, are only a quarter and a third more massive than the Earth, respectively. The discovery helps complete our picture of the statistics of exoplanet prevalence, correcting implicit biases in earlier observations. Incidentally, hypothetical observers on those planets would soon be in a uniquely favorable position to detect our Earth, using the so-called transit method. The results have just been published in the journal Astronomy & Astrophysics. 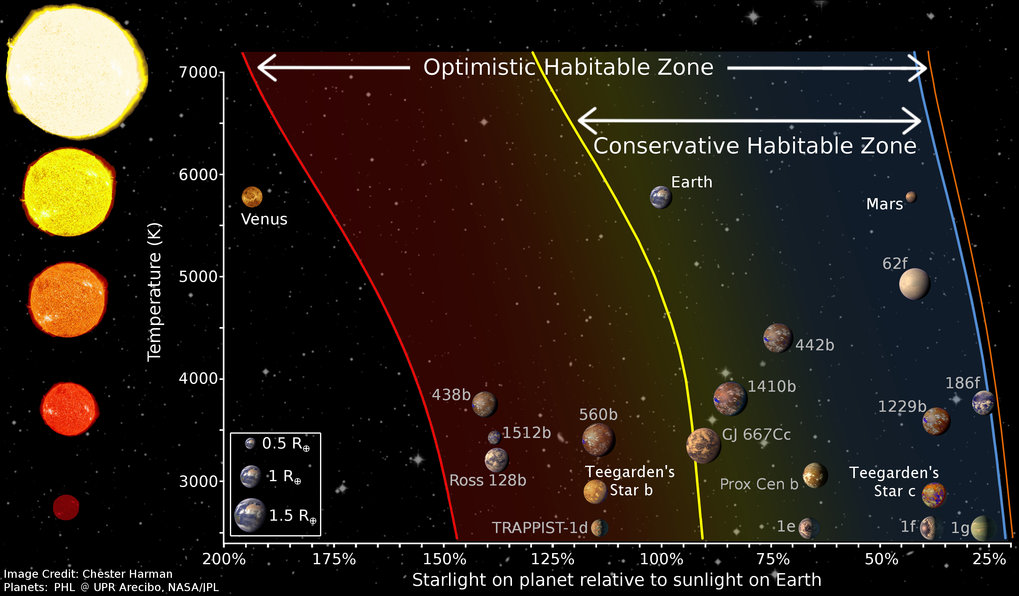 By now, astronomers have detected more than 4000 exoplanets, that is, planets orbiting stars other than the Sun. But our view of the alien worlds out there is highly biased. The standard methods of (indirectly) detecting exoplanets all require precise measurements of the host star’s light, and such measurements are much easier for stars that are about as bright as our Sun. Most stars within our galaxy are dimmer and more reddish than that, and for those stars, exoplanet detection has been difficult – potentially biasing the conclusions astronomers might want to draw about the prevalence and properties of exoplanets in general!

The CARMENES instrument at Calar Alto Observatory, which saw “first light” in early 2016, is a twin spectrograph optimized for targeting just such dim, reddish stars. Martin Kürster, leading scientist for CARMENES at the Max Planck Institute for Astronomy, says: “CARMENES can help us correct our biases by studying the by far most common stars in our galaxy. The instrument is sensitive enough to detect Earth-like, potentially habitable planets around such stars.”

One of the more than 300 red dwarf stars targeted by CARMENES was “Teegarden’s star,” in the constellation Aries, named for NASA scientist Bonnard J. Teegarden who found the star in data that had been collected for tracking asteroids. With just 8% of the Sun’s mass, around 10% of the Sun’s radius and a reddish 2900 K in temperature, Teegarden’s star is one of the smallest stars in our neigbourhood. At a distance of just 12.5 light-years, it is also one of the closest stars. Following the usual conventions, the two planets have been designated "Teegarden b" and "Teegarden c".

Mathias Zechmeister of Göttingen University (formerly at MPIA), lead author of the study, says: “We observed this star for three years, looking for periodic variations in its velocity. The data clearly show the existence of two planets.” Following the usual naming conventions, the planets have been designated Teegarden b and Teegarden c.

The so-called radial velocity method used for the detection allows for the measurement of a planets’ minimum mass, and estimates for their probable mass. The planets around Teegarden’s star have minimum masses of 1.05 and 1.1 Earth masses, respectively, with best mass estimates of 1.25 and 1.33 Earth masses, making them somewhat Earth-like. Both planets orbit inside their star’s habitable zone, where liquid water is possible, although one of the planets would need to have a rather special atmosphere in order to allow for water on its surface. Estimates put the system’s age at around 8 billion years, nearly twice as old as Earth, allowing plenty of time for the evolution of life.

Incidentally, within a few decades, it would be easier for hypothetical intelligent beings on one of those planets to detect Earth than the other way around: Between the years 2044 and 2496, Teegarden’s star will be positioned to see the Solar System edge on, and its inhabitants should be able to detect Earth using the so-called transit method as they see our planet pass directly in front of the disk of the Sun.

By that time, Earth’s astronomers can be expected to have raised the stakes already: the similarities to Earth and potential habitability make the two planets prime candidates for further in-depth study by the next generation of Earth-based telescopes, in pursuit of one of the most exciting goals of modern astronomy: detecting life on another planet.

The results have been published as M. Zechmeister et al. 2019, “The CARMENES search for exoplanets around M dwarfs: Two temperate Earth-mass planet candidates around Teegarden’s Star” in the journal Astronomy & Astrophysics.

The CARMENES (Calar Alto high-Resolution search for M dwarfs with Exoearths with Near-infrared and optical Échelle Spectrographs) instrument is a high-resolution optical and near infrared spectrograph. The project is carried out by the universities of Göttingen, Hamburg, Heidelberg, and Madrid, the Max-Planck Institut für Astronomie Heidelberg, Institutes of the Consejo Superior de Investigaciones Científicas in Barcelona, Granada, and Madrid, Thüringer Landessternwarte, Instituto de Astrofísica de Canarias, and Calar-Alto Observatory. In the framework of CARMENES, German and Spanish scientists have been searching for planets around stars in the solar neighbourhood since 2016. The new planets are number ten and eleven among the project’s discoveries.