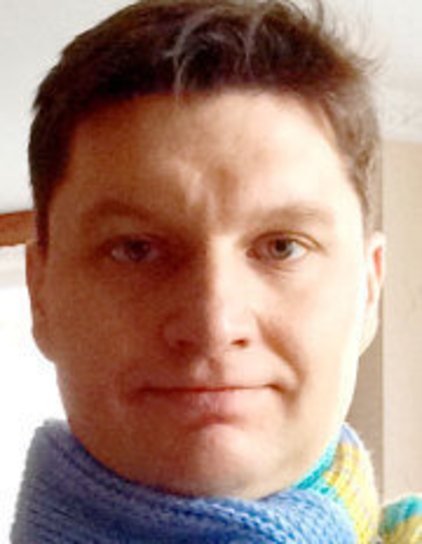 Bringing the building blocks of life down to Earth, from space

Astronomers from McMaster University and the Max Planck Institute for Astronomy have completed calculations that lead to a consistent scenario for the emergence of life on Earth, based on astronomical, geological, chemical and biological models. In this scenario, life forms a mere few hundred million years after Earth’s surface was cool enough for liquid water; the essential building blocks for life were formed in space during the formation of the solar system, and delivered to warm little ponds on Earth by meteorites. The new results have been published in the Proceedings of the US National Academy of Sciences. 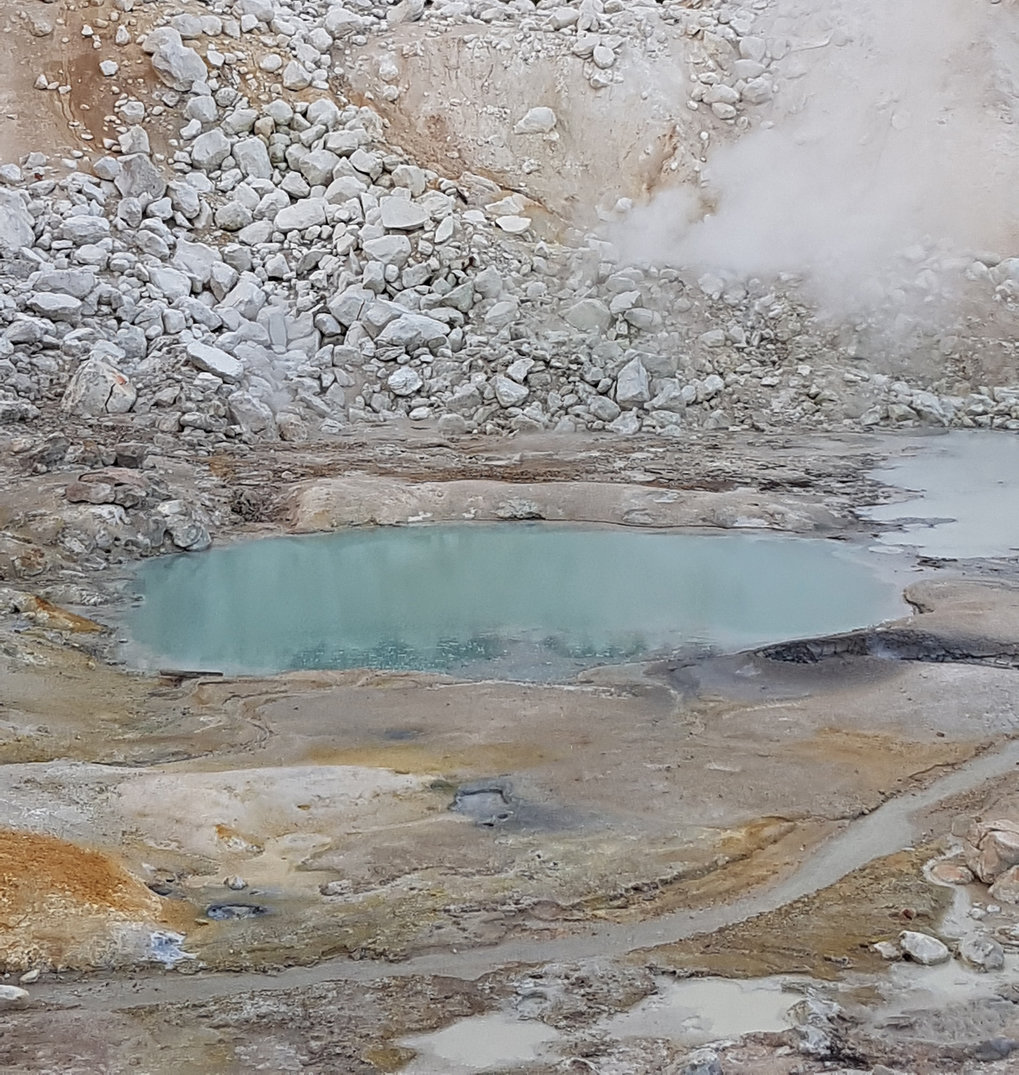 How life began on Earth, roughly 4 billion years ago, is one of the great scientific questions. New results from scientists at McMaster University and the Max Planck Institute for Astronomy suggest a key role for meteorites landing in warm little ponds, delivering essential organic molecules that kick-started the emergence of life in the shape of self-replicating RNA molecules.

The astronomers reached their conclusions after assembling models about planet formation, geology, chemistry and biology into a coherent quantitative model for the emergence of life. Perhaps the most interesting result from these calculations is that life must have emerged fairly early, while Earth was still taking shape, only a few hundred million years after the Earth had cooled sufficiently to allow liquid surface water, such as ponds or oceans. The building blocks of life would have been brought to Earth by meteorites during an era when Earth’s bombardment by such small extraterrestrial rocks was much more intense than today.

Lead author Ben Pearce (McMaster University) says:  “No one’s actually run the calculation before. It’s pretty exciting.” His colleague and co-author Ralph Pudritz adds, “Because there are so many inputs from so many different fields, it’s kind of amazing that it all hangs together. Each step led very naturally to the next. To have them all lead to a clear picture in the end is saying there’s something right about this.”

Thomas Henning from the Max Planck Institute for Astronomy, another co-author, says: “In order to understand the origin of life, we need to understand Earth as it was billions of years ago. As our study shows, astronomy provides a vital part of the answer. The details of how our solar system formed have direct consequences for the origin of life on Earth.”

The new work supports the “warm little pond” hypotheses for the origin of life, with RNA polymers forming in shallow ponds, during cycles in which the pond water evaporates and is refilled periodically. It shows how meteorites could have transported a sufficient amount of nucleobases to thousands of such ponds on Earth, helping to kick-start the emergence of self-replicating RNA molecules in at least one of those ponds. 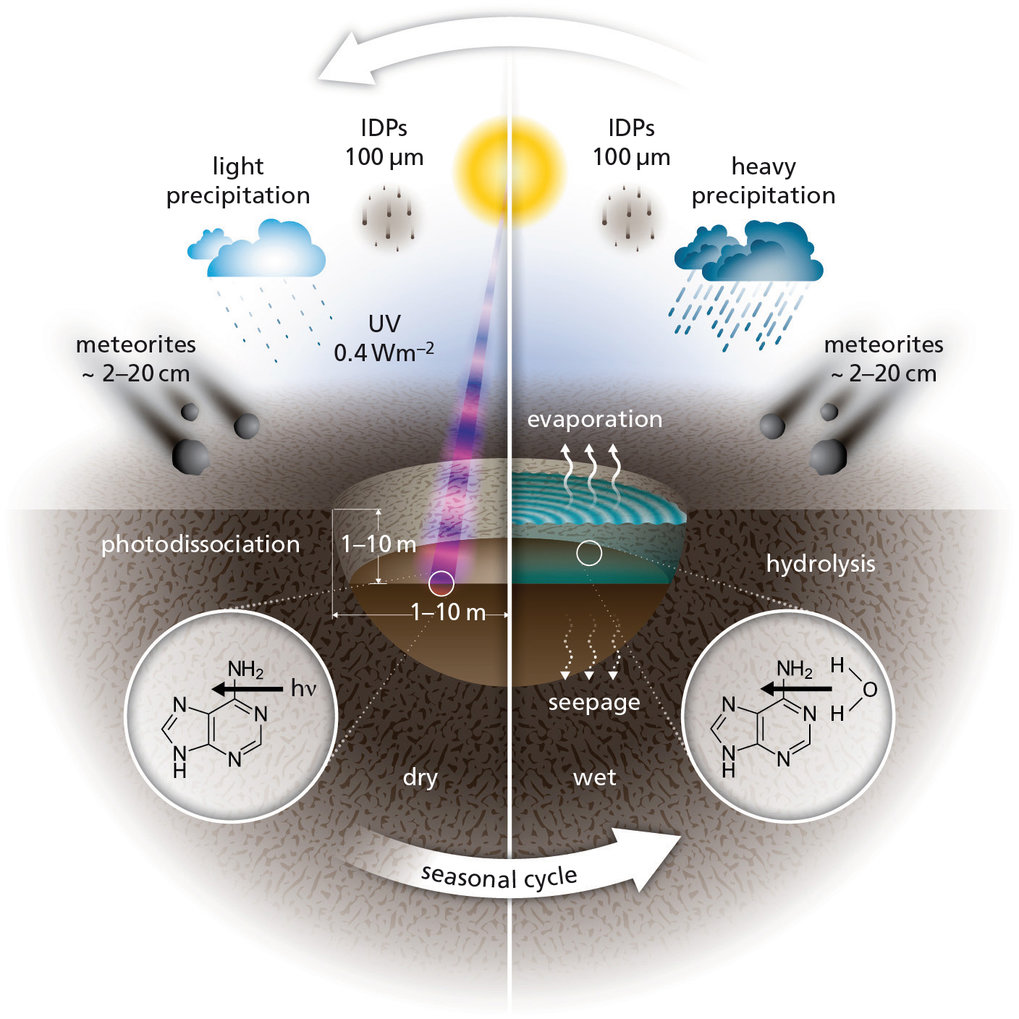 Dmitry Semenov of the Max Planck Institute for Astronomy adds: “Based on what we know about planet formation and the chemistry of the solar system, we have proposed a consistent scenario for the emergence of life on Earth. We have provided plausible physical and chemical information about the conditions under which life could have originated. Now it’s the experimentalists turn to find out how life could indeed have emerged under these very specific early conditions.”

The work described here has been published as B. K. D. Pearce et al., “Origin of the RNA World: The Fate of Nucleobases in Warm Little Ponds” in the Proceedings of the National Academy of the United States of America.

The article text is available under embargo from the PNAS website.