A cosmic collider: Was the  IceCube neutrino generated in a precessing jet-jet interaction in TXS 0506+056?

It was quite a sensation in July 2018 when scientists reported that they had detected a highly energetic neutrino from a remote galaxy at the IceCube observatory at the South Pole about a year previously. It is said to come from an object designated as TXS 0506+056 – a very active faraway galaxy. An international team led by Silke Britzen from the Max Planck Institute for Radio Astronomy has now examined detailed radio observations of TXS 0506+056 from the years 2009 to 2018 and found an explanation for the neutrino activity. The cause is said to be a cosmic collision within the galaxy. 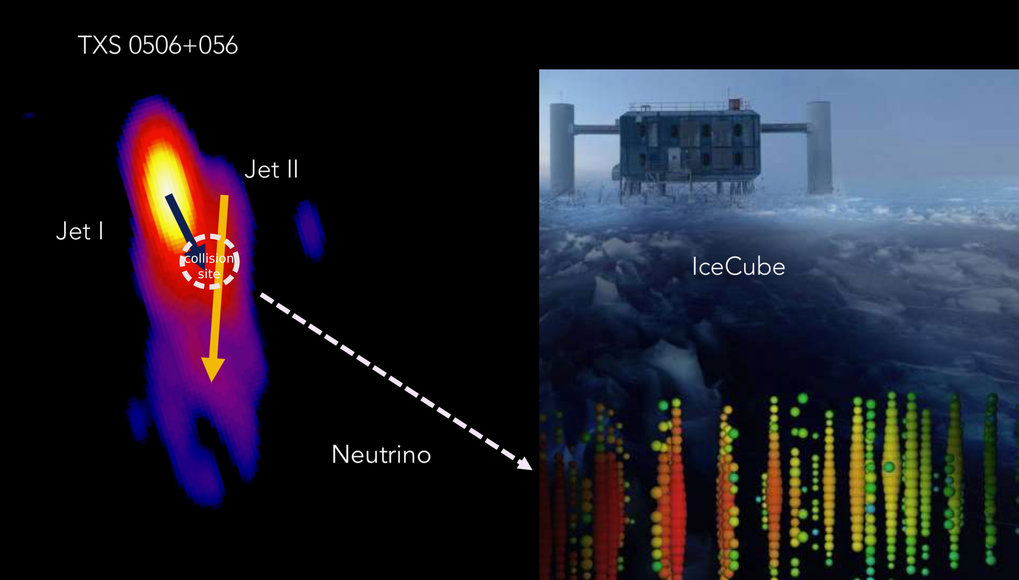 Conditions in objects such as TXS 0506+056 are turbulent. These active galactic nuclei (AGNs) are in actual fact the biggest sources of energy in the universe. Matter falls into central, supermassive black holes, whereby particle beams and plasma streams – so-called jets – are projected into intergalactic space.

The blazars, which send the jet directly towards the Earth and in so doing make the object appear particularly bright, form a special category of these AGNs. The neutrino event “IceCube-170922A” in September 2017 supposedly originated in this kind of blazar, designated as TXS 0506+056. It is approximately 3.8 billion light years away from Earth.

“It was somewhat of a mystery why it was possible to identify this particular galaxy as the source of the neutrino,” says Silke Britzen of the Max Planck Institute for Radio Astronomy in Bonn, who is also lead author of the recently published study. “That’s why we wanted to find out what makes TXS 0506+056 so special.” For this reason, the researchers investigated a time series of very detailed radio images of the galactic jet.

Surprisingly, an unexpected interaction appeared in the jet material coming from TXS 0506+056. While the plasma in the jet normally flows steadily in a kind of channel, in this galaxy the situation appears to be different. The increased neutrino activity during a neutrino eruption in 2014 and 2015 can evidently be traced back to a cosmic collision within the galaxy, as can the individual neutrino IceCube-170922A which was detected in 2017.

According to a scenario proposed by the astronomers, newly-created jet material comes into contact with an old jet, an assumption which appears to be supported by the strongly curved structure of the jet which has been observed. A second possible explanation is the collision of two jets in the same source. In any case, it results from a major collision.

“This collision of jetted material is currently the only viable mechanism which can explain the neutrino detection from this source,” says Markus Böttcher, a scientist at the North West University in Potchefstroom, South Africa. What does such a galactic jet consist of, however? Electrons and positrons? Or material which also contains protons? Or a combination of both? “Protons must at least be present in the material, otherwise we would not have detected the neutrino,” says Böttcher.

Collisions between entire galaxies appear to occur quite frequently in space. Based on the assumption that two galaxies colliding with each other is evidence of a supermassive black hole in the middle, the collision of these galaxies produces a pair of black holes, which circle each other at shorter and shorter distances and eventually merge into each other.

For a long time, astronomers have been looking for active galactic nuclei with two black holes at a relatively short distance from each other of just a few light years. However, they evidently occurred only very rarely and were also difficult to identify. In the case of TXS 0506+056, however, the researchers succeeded in doing so after finding signs of a procession of the central jet, meaning the jet changes its axis like a spinning top.

“This precession can be explained either by the presence of a supermassive black hole binary or the Lense-Thirring effect, as predicted by Einstein's theory of general relativity,” says Michal Zajaček from the Centre for Theoretical Physics in Warsaw, one of the authors of the study. The Lense-Thirring effect could in turn have been triggered by a second massive black hole at a greater distance in the centre of the galaxy.

Christian Fendt from the Max Planck Institute for Astronomy in Heidelberg is astonished. “The closer we get to the origin of the jet, the more complicated its inner structure and dynamic becomes. And the binary black holes mean that the material ejected from them must also have a complex structure.

In any case, for the first time, it appears to have been possible for the first time to confirm a collision between two jets in the heart of a galaxy just a few light years apart and to associate this with a cosmic neutrino.