In our 13.8 billion-year-old universe, most disk galaxies like our Milky Way were thought to form gradually, reaching their large mass relatively late. But now astronomers led by Marcel Neeleman from the Max Planck Institute for Astronomy, using the ALMA observatory, have found a massive rotating disk galaxy, seen when the universe was only ten percent of its current age. The observation shows that some disk galaxies must have formed much more quickly. This supports earlier computer simulations that had indicated the role of a quick, "cold" mode of galaxy formation. The results have been published in the journal Nature. 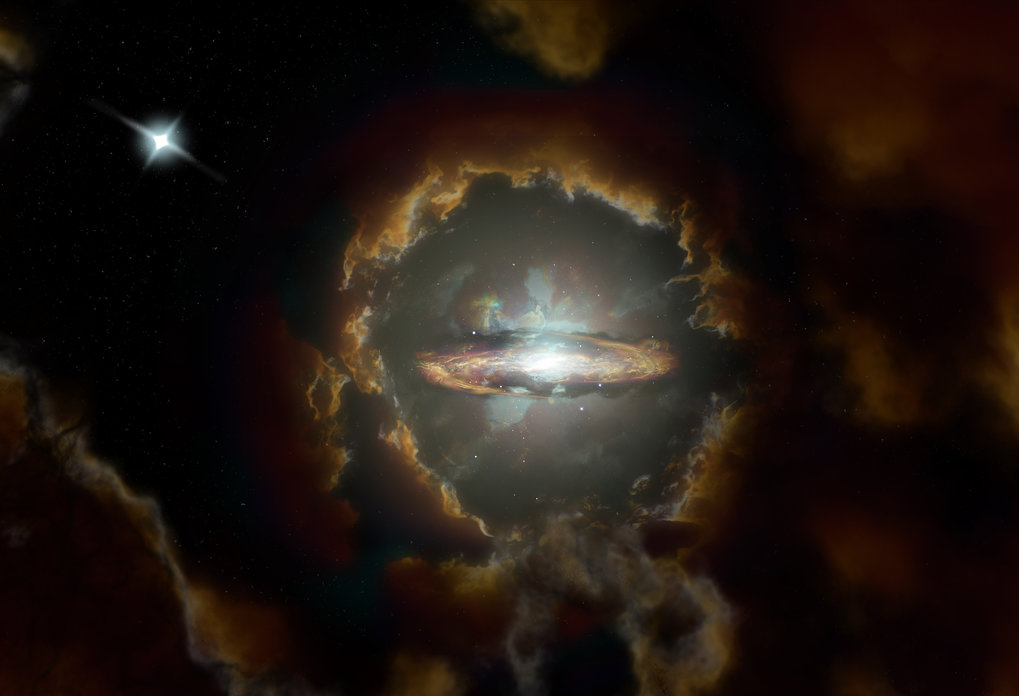 At the time of the big bang, the universe was featureless and uniform – a bland plasma of charged particles. Explaining how, over the following 13.8 billion years, a rich array of structures formed in our cosmos, including a diverse variety of galaxies with countless stars, is one of the fundamental questions of modern cosmology. Now, a discovery made by a group led by Marcel Neeleman (Max Planck Institute for Astronomy) has uncovered an important piece of the puzzle: The astronomers detected a disk galaxy – similar to our home galaxy – that had reached a considerable mass of 70 billion solar masses as early as 1.5 billion years after the big bang, when the universe was 10% its current age.

The result provides valuable input for a present-day discussion about how galaxies form, which had considered two fundamentally different mechanisms: a "hot mode" scenario, where hot gas needs to cool down for a long time to form a disk, and the more recent "cold mode accretion" scenario, where cool gas is led onto a newly formed galaxy in a way that creates a disk on shorter time-scales. Finding a fully-fledged, massive disk a mere 1.5 billion years after the big bang indicates that cold mode accretion must play a significant role in galaxy formation – which is indeed what computer simulations like the Auriga and TNG50 simulations had indicated.

From cosmic uniformity to diversity

According to modern cosmology, the universe as we know it began in a hot dense phase 13.8 billion years ago, as an almost perfectly homogeneous plasma made of electrons and protons. Even after that plasma had cooled down sufficiently for atoms to form, it had almost the same density everywhere. One of the central tasks of astrophysics is to explain how we have gotten from this nearly featureless universe to the cosmos we see around us today, with its galaxies, stars, and planets.

Going by the best available simulations, the "backbone" of cosmic structure is a cosmic network of so-called dark matter, which does not interact with light at all, and thus remains invisible. Under their own gravity, minute inhomogeneities in the density of dark matter grow over billions of years – where there is a little bit more dark matter, gravitational attraction is a little bit stronger, so additional dark matter is pulled in. The result is a gigantic cosmic network of filaments and nodes (with greater density) surrounding cosmic voids (with smaller density).

By mass, dark matter accounts for roughly 85% of all matter in the universe, while atoms like the ones our stars, our planets and our bodies are made of account for only 15%. By mass, the dark matter network is by far the most important large-scale structure in our universe. But as human beings, we are particularly interested in the stuff we ourselves, and our environment, are made of – and for astronomers, that ordinary matter is what can be observed using telescopes and astronomical instruments.

Galaxies form within clumps of the cosmic dark matter network, so-called halos, which have a markedly higher density than the surrounding matter. It is natural that these dark matter concentrations gravitationally attract ordinary matter, but for that ordinary matter to form luminous stars, and thus to become visible over large distances, certain conditions need to be met. Stars form when smaller regions within a cloud of molecular gas collapse, and heat up. But in order for that to happen, and for gas to form molecules in the first place, the gas needs to be sufficiently cool – directly before star formation, a mere 10 degrees Celsius above absolute zero, or 10 Kelvin.

Under those conditions, it is quite a challenge to build large galaxies like our own Milky Way, which have a massive disk of cool gas, in which new stars are forming. An important mode of galaxy growth are collisions and mergers of smaller galaxies. “Most galaxies that we find early in the universe look like train wrecks because they underwent consistent and often ‘violent’ merging” says Neeleman. “These hot mergers make it difficult to form well-ordered, cold rotating disks like we observe in our present universe.” Wherever gas falling onto such galaxies is heated up, which happens inevitably when gas clouds collide and form so-called shock fronts, it takes a few billion years of cooling-down before an orderly gas disk can form.

Modern simulations of structure formation make use of supercomputers to follow dark matter and gas over billions of years after the big bang. In effect, they create a virtual universe, based on the known physical laws, that allows scientists to analyze all phases of cosmic evolution.

Two recent simulations, the smaller-scale Auriga simulation of Milky-Way-like galaxies and the large-scale detailed TNG50-Simulation, opened up the possibility of an alternative mode of formation: Already cold gas flowing into galaxies, following the filaments of the dark matter network, avoiding the collisions that would heat the gas up, allows for the formation of massive disk galaxies at much earlier times than the collision-and-cooling scenario.

How to find those early, cool galaxies?

At this point, it was clear that the most direct way of testing the prediction from the simulations would be to find massive galactic disks in the early universe. After all, that is what the hot-then-cooling-down scenario could not explain, while the cold flow scenario could. Fortunately, astronomers are in a position to observe the distant past. Light from distant regions takes some time to reach us. If a distant region is so far away that its light takes 12 billion years to reach us, light from that distant region reaching our telescopes today carries information about how that region looked 12 billion years ago, when the universe was about 10% of its present age. This was the motivation for Marcel Neeleman and his colleagues to set out in search for early disk galaxies.

The problem is that distant galaxies are difficult to observe. Not only do you need a powerful telescope, you also need to know where to look. Neeleman's collaborator and former PhD co-advisor J. Xavier Prochaska is an expert on using extremely bright, extremely distant quasars – whose luminosity is powered by matter falling onto a galaxy's central black hole – to deduce the presence and properties of gas that is between the distant quasar and us from the way that this gas absorbs some of the quasar's light. 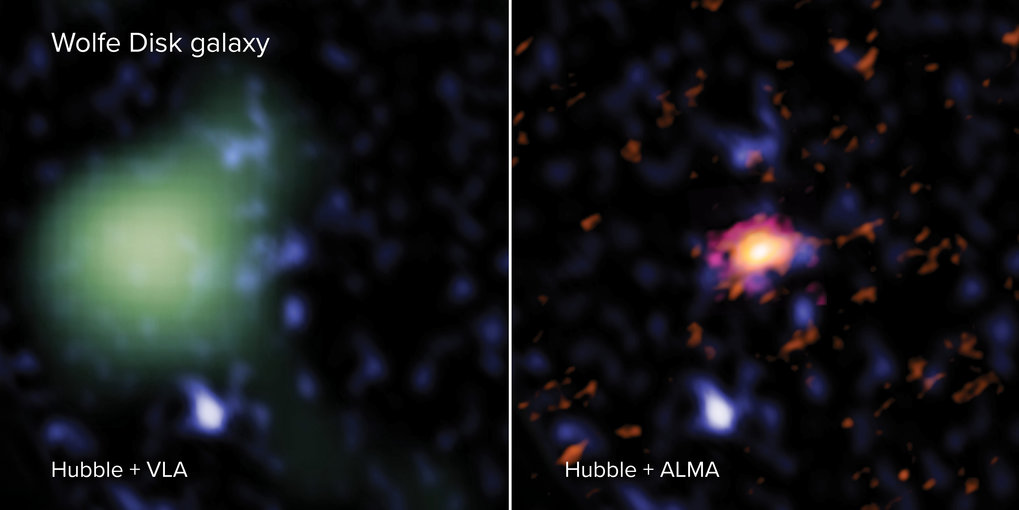 Neeleman and his colleagues used observations with the ALMA observatory, an array of dozens of radio telescopes in Chile, to identify 6 early galaxy candidates in this way, which were so distant that their light had travelled on the order of 10 billion years to reach us. When they used ALMA's unrivalled sensitivity and resolution to observe the brightest of those candidate objects, DLA0817g, in more detail, they found tell-tale wavelength shifts, known as Doppler shifts, that told them they were indeed dealing with a large, stable, rotating disk. Additional observations were made with the VLA radio telescopes. Combining the apparent size with the data quantifying disk rotation, the researchers concluded they were looking at a disk with the mass of 70 billion suns. The observations show the disk as it was when the universe was a mere 1.5 billion years old, about 10% of its current age.

The researchers named DLA0817g the "Wolfe Disk", after the late Arthur M. Wolfe, former PhD advisor to three of the paper's four authors, including Prochaska and Neeleman. Wolfe's long-term research program on the absorption of quasar light is what made this and many other discoveries possible. The Wolfe Disk's mass and age are a strong indication that the cold mode accretion scenario has indeed played a significant role in cosmic evolution – vindicating simulations like Auriga and TNG50. The details will still need additional input from both simulations and observation. “We think the Wolfe Disk has grown primarily through the steady accretion of cold gas,” says Prochaska, “Still, one of the questions that remains is how to assemble such a large gas mass while maintaining a relatively stable, rotating disk.”

Wolfe Disks are probably quite common out there

A galaxy will only be detectable by its absorption of quasar light if there is a chance alignment between us as the observers, the galaxy, and the quasar. Such alignments are rare in and of themselves; if the Wolfe Disk were itself an unusual, uncommon object, that would increase the improbability of this chance discovery considerably. Much more probable is the assumption that galaxies like the Wolfe Disk are comparatively common in the early universe.

“The fact that we found the Wolfe Disk using this method, tells us that it belongs to the normal population of galaxies present at early times,” said Neeleman. “When our newest observations with ALMA surprisingly showed that it is rotating, we realized that early rotating disk galaxies are not as rare as we thought, and that there should be a lot more of them out there.” That, too, is a claim that the astronomers hope to test by continuing their search, and detecting additional massive disk galaxies in the early universe.

The article in which the results are described is "A Cold, Massive, Rotating Disk 1.5 Billion Years after the Big Bang", published in the journal Nature. During the embargo period, the article can be obtained by accredited journalists by contacting press@nature.com.