Andromeda in a new Light 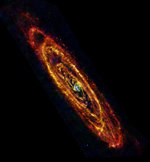 NASA's "Astronomy Picture of the Day" for February 2, 2013, is an infrared image of the Andromeda galaxy, by the Herschel Space Telescope. The image is part of a program led by Oliver Krause of the Max Planck Institute for Astronomy (MPIA).

Krause said: "MPIA contributed to the construction of the PACS instrument on the Herschel space telescope. In return, we were allowed guaranteed observation time, part of which we used for these observations of the Andromeda galaxy. For us, this observation was an absolute must-have: Andromeda is the closest spiral galaxy to our own, and Herschel can show in detail which regions of Andromeda are currently forming new stars. This data set is bound to be part of Herschel's long-term legacy – 20 years from now, astronomers will still be using it in their analyses."

The Herschel Space Telescope itself only has about one month of observation time left. It is gradually running out of coolant, which is a necessary prerequisite for infrared observations.