Press releases of our partners

How to feed a baby star

Astronomers have used the GRAVITY instrument to study the immediate vicinity of a young star in more detail than ever before. Their observations confirm a thirty-year-old theory about the growth of young stars: the magnetic field produced by the star itself directs material from a surrounding accretion disk of gas and dust onto its surface. The results, published today in the journal Nature, help astronomers to better understand how stars like our Sun are formed and how Earth-like planets are produced from the disks surrounding these stellar babies. 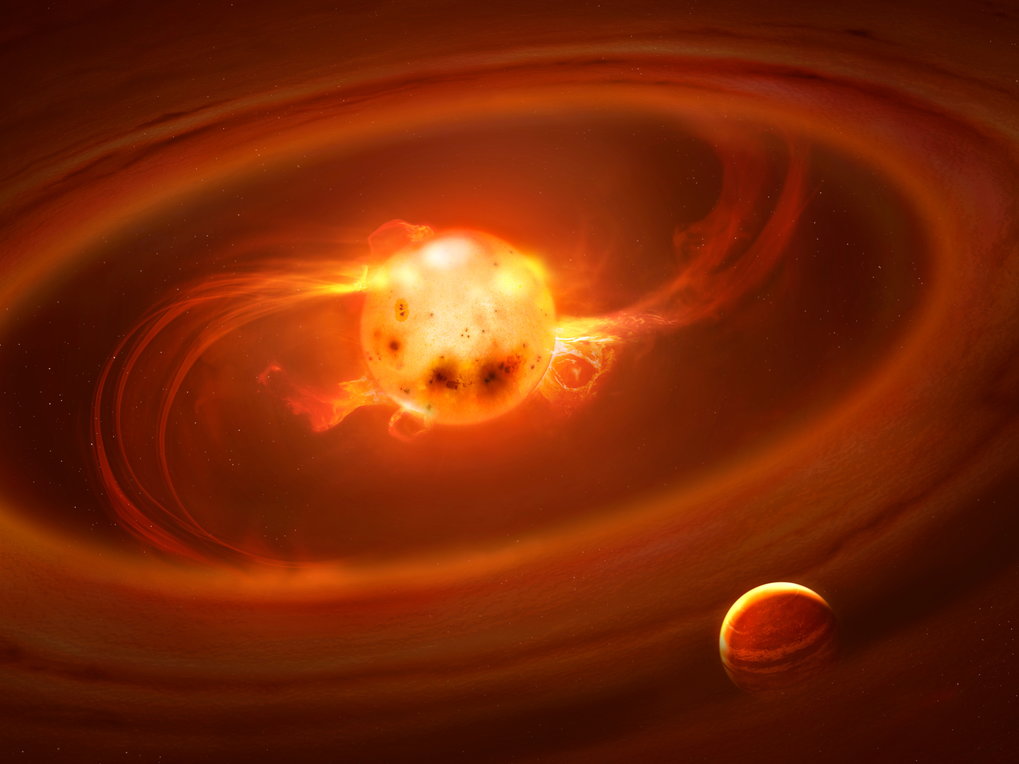 When stars form, they start out comparatively small and are located deep inside a cloud of gas. Over the course of the next hundreds of thousands of years, they draw more and more of the surrounding gas onto themselves, increasing their mass in the process. Using the GRAVITY instrument, a group of researchers that includes astronomers and engineers from the Max Planck Institute for Astronomy (MPIA), has now found the most direct evidence yet for how that gas is funnelled onto young stars: it is guided by the star's magnetic field onto the surface in a narrow column.

The relevant length scales are so small that even with the best telescopes currently available no detailed images of the process are possible. Still, using the latest observation technology, astronomers can at least glean some information. For the new study, the researchers made use of the superbly high resolving power of the instrument called GRAVITY. It combines four 8-meter VLT telescopes of the European Southern Observatory (ESO) at Paranal observatory in Chile into a virtual telescope that can distinguish small details as well as a telescope with a 100-meter-mirror could.

Using GRAVITY, the researchers were able to observe the inner part of the gas disk surrounding the star TW Hydrae. “This star is special because it is very close to Earth at only 196 light years away, and the disk of matter surrounding the star is directly facing us,” says Rebeca García López (Max Planck Institute for Astronomy, Dublin Institute for Advanced Studies and University College Dublin), main author and leading scientist of this study. “This makes it an ideal candidate to probe how matter from a planet forming disk is channelled on to the stellar surface.”

The observation allowed the astronomers to show that near-infrared radiation emitted by the entire system indeed originates in the innermost region, where hydrogen gas is falling onto the star's surface. The results point clearly towards a process known as magnetospheric accretion, that is, infalling matter guided by the star's magnetic field.

A star is born when a dense region within a cloud of molecular gas collapses under its own gravity, becomes considerably denser, heats up in the process, until eventually density and temperature in the resulting protostar are so high that nuclear fusion of hydrogen to helium starts. For protostars up to about two times the mass of the Sun, the ten or so million years directly before the ignition of proton-proton nuclear fusion constitute the so-called T Tauri phase (named after the first observed star of this kind, T Tauri in the constellation Taurus).

Stars that we see in that phase of their development, known as T Tauri stars, shine quite brightly, in particular in infrared light. These so-called “young stellar objects” (YSOs) have not yet reached their final mass: they are surrounded by the remnants of the cloud from which they were born, in particular by gas that has contracted into a circumstellar disk surrounding the star. In the outer regions of that disk, dust and gas clump together and form ever-larger bodies, which will eventually become planets. Large amounts of gas and dust from the inner disk region, on the other hand, are drawn onto the star, increasing its mass. Last but not least, the star's intense radiation drives out a considerable portion of the gas as a stellar wind.

Guidelines to the surface: the star's magnetic field

Naively, one might think that transporting gas or dust onto a massive, gravitating body is easy. Instead, it turns out to be not that simple at all. Due to what physicists call the conservation of angular momentum, it is much more natural for any object – whether planet or gas cloud – to orbit a mass than to drop straight onto its surface. One reason why some matter nonetheless manages to reach the surface is a so-called accretion disk, in which gas orbits the central mass. There is plenty of internal friction inside that continually allows some of the gas to transfer its angular momentum to other portions of gas and move further inward. Yet, at a distance from the star of less than 10 times the stellar radius, the accretion process gets more complex. Traversing that last distance is tricky.

Thirty years ago, Max Camenzind, at the Landessternwarte Königstuhl (which has since become a part of the University of Heidelberg), proposed a solution to this problem. Stars typically have magnetic fields – those of our Sun, for instance, regularly accelerate electrically charged particles in our direction, leading to the phenomenon of Northern or Southern lights. In what has become known as magnetospheric accretion, the magnetic fields of the young stellar object guide gas from the inner rim of the circumstellar disk to the surface in distinct column-like flows, helping them to shed angular momentum in a way that allows the gas to flow onto the star.

Checking up on magnetospheric accretion

Having a model that explains certain physical processes is one thing. However, it is important to be able to test that model using observations. But the length scales in question are of the order of stellar radii, very small on astronomical scales. Until recently, such length scales were too small, even around the nearest young stars, for astronomers to be able to take a picture showing all relevant details.

First indication that magnetospheric accretion is indeed present came from examining the spectra of some T Tauri stars. Spectra of gas clouds contain information about the motion of the gas. For some T Tauri stars, spectra revealed disk material falling onto the stellar surface with velocities as high as several hundred kilometers per second, providing indirect evidence for the presence of accretion flows along magnetic field lines. In a few cases, the strength of the magnetic field close to a T Tauri star could be directly measured by a combining high-resolution spectra and polarimetry, which records the orientation of the electromagnetic waves we receive from an object.

The instrument GRAVITY plays a key role here. It was developed by a consortium that includes the Max Planck Institute for Astronomy, led by the Max Planck Institute for Extraterrestrial Physics. In operation since 2016, GRAVITY links the four 8-meter-telescopes of the VLT, located at the Paranal observatory of the European Southern Observatory (ESO). The instrument uses a special technique known as interferometry. The result is that GRAVITY can distinguish details so small as if the observations were made by a single telescope with a 100-m mirror.

Catching magnetic funnels in the act

In the Summer of 2019, a team of astronomers led by Jerome Bouvier of the University of Grenobles Alpes used GRAVITY to probe the inner regions of the T Tauri Star with the designation DoAr 44. It denotes the 44th T Tauri star in a nearby star forming region in the constellation Ophiuchus, catalogued in the late 1950s by the Georgian astronomer Madona Dolidze and the Armenian astronomer Marat Arakelyan. The system in question emits considerable light at a wavelength that is characteristic for highly excited hydrogen. Energetic ultraviolet radiation from the star ionizes individual hydrogen atoms in the accretion disk orbiting the star.

The magnetic field then influences the electrically charged hydrogen nuclei (each a single proton). The details of the physical processes that heat the hydrogen gas as it moves along the accretion current towards the star are not yet understood. The observed greatly broadened spectral lines show that heating occurs.

For the GRAVITY observations, the angular resolution was sufficiently high to show that the light was not produced in the circumstellar disk, but closer to the star's surface. Moreover, the source of that particular light was shifted slightly relative to the centre of the star itself. Both properties are consistent with the light being emitted near one end of a magnetic funnel, where the infalling hydrogen gas collides with the surface of the star. Those results have been published in an article in the journal Astronomy & Astrophysics.

Too small to be part of the disk 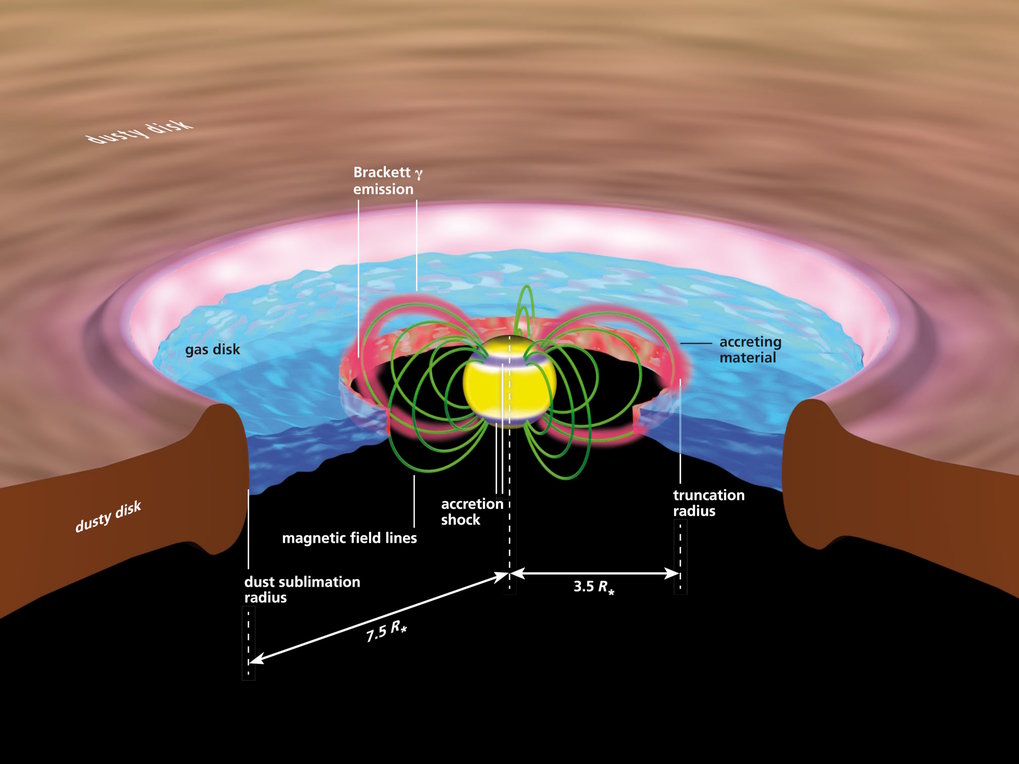 With those observations, Rebeca García López and her colleagues have pushed the boundaries even further inwards. GRAVITY could see the emissions corresponding to the line associated with highly excited hydrogen (Brackett-γ, Brγ) and demonstrate that they stem from a region no more than 3.5 times the radius of the star across (about 3 million km, or 8 times the distance the distance between the Earth and the Moon).

This is a significant difference. According to all physics-based models, the inner rim of a circumstellar disk cannot possibly be that close to the star. If the light originates from that region, it cannot be emitted from any section of the disk. At that distance, the light also cannot be due to a stellar wind blown away by the young stellar object – the only other realistic possibility. Taken together, what is left as a plausible explanation is the magnetospheric accretion model.

In future observations, again using GRAVITY, the researchers will try to get data that allows them a more detailed reconstruction of physical processes close to the star. “By observing the location of the funnel's lower endpoint over time, we hope to pick up clues as to how distant the magnetic North and South poles are from the star’s axis of rotation,” explains Wolfgang Brandner, co-author and scientist at MPIA. If North and South Pole directly aligned with the rotation axis, their position over time would not change at all.

They also hope to pick up clues as to whether the star’s magnetic field is really as simple as a North Pole–South Pole configuration. “Magnetic fields can be much more complicated and have additional poles,” explains Thomas Henning, Director at MPIA. “The fields can also change over time, which is part of a presumed explanation for the brightness variations of T Tauri stars.”